Harry Grant has revealed how some simple but telling advice from Wayne Bennett gave him the confidence to play without fear of failure in his stunning Maroons debut.

As a youth in Central Queensland the aspiring hooker always felt good on Thursday mornings on his way to school when the Maroons had beaten the Blues in the Origin arena.

Grant will be feeling even better on Thursday, the day after his pivotal role in the Origin series deciding 20-14 win at Suncorp Stadium.

Coach Wayne Bennett said he performed "magnificently" while Maroons legend Steve Renouf said in his NRL.com column that the 22-year-old played with such aplomb in the Origin arena that it appeared as though he had "been there forever".

In his 56 minutes on the park, Grant made two line breaks, scored a try and made 33 tackles. He was everywhere.

When he wasn’t at dummy-half, Grant moved into the middle in an unfamiliar role Ben Hunt played with distinction in Game One.

"Hunty does that role a lot better than me. I was a bit confused but Wayne said 'I don't want you for attack, I want you for defence', so he said just turn up in defence and don't gas yourself in attack,” Grant said.

"To be honest, I was pretty confident with all the boys around me to back myself and play my game how I see it.

"Having Wayne behind me makes it easy to just go out there and back myself. If something doesn't right, it's not the end of the world, just get back up and go again.

"He is just a good guy, he instils a lot of confidence in you and he is pretty simple. He has done it before and been around for a long time and you know what he is doing works. Everyone buys in and it's pretty special to be around him."

By heeding Bennett’s advice to not overplay his hand Grant had the mental and physical stamina to dart and burrow his way over in the second half to give Queensland a 20-6 lead.

"I don't know what happened, it happened so quick. My little limbs just got there but it was a good feeling," he said.

"It was a lot faster than club level. I was trying to find my lungs on a number of occasions, but to hang in there and get the result in the end is something I will remember forever. It's pretty surreal, the best feeling ever."

Plenty of good judges believe he can have a decade-long career as Maroons hooker and follow in mentor Cameron Smith’s footsteps.

That pressure did not get to him. Grant played without fear despite the magnitude of the occasion.

The debut gets better and better for Harry Grant

"We have a close group here and we have come together nicely after the last few weeks.

"It's a massive honour just to play for Queensland, I didn't even think about it as a chance. I was just proud to represent Queensland.

"As a young kid, I thought how much it meant to me to go to school on a Thursday when Queensland won, it was a pretty good feeling. That was in the back of my mind.

"I know how much Queensland and the state means to you, so as a squad it means so much to us and the fans. We wanted to do everyone proud.”

Bennett had shared tales of the Maroons' rich history with his young squad and Grant lapped up the stories about Arthur Beetson and the 1980 side and other famous wins.

"We did touch on the history of Origin and it's great to have Wayne there because he has been around it and has been there from the start," Grant said.

"He has some great stories from all the years of Origin, he touched on moments here and there and it hit home with us.

Grant certainly came up with the goods for the Maroons, and it was his move on loan to Wests Tigers this year that gave the Dally M rookie of the year the opportunity to press his claims.

"I can't thank Melbourne Storm and the Wests Tigers enough for the opportunity they gave me this year," he said.

"It was great timing with the whole COVID situation. If I did stay in Melbourne I probably wouldn't have played much footy. I definitely wouldn't be here playing State of Origin." 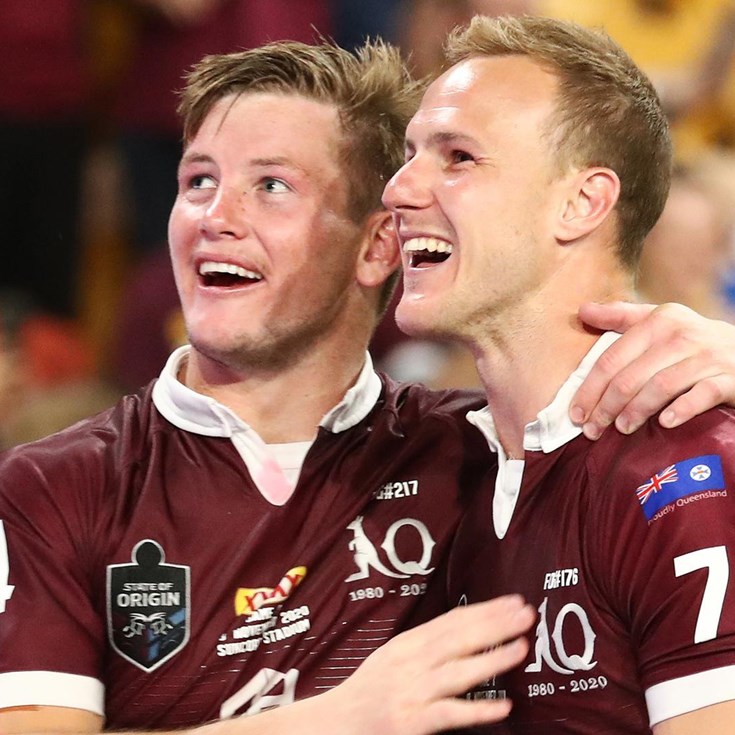 Grant in Maroons mix for decider as Bennett weighs up changes