For the first time in 13 years, Craig Bellamy is having to ponder who will be his starting halfback.

It’s a position he didn’t had to fret over for even a second. Cooper Cronk had been the constant since 2006 after helping lead the Melbourne Storm to a grand final appearance against Brisbane, winning his first Dally M halfback of the year award along the way.

The water-tight partnership between Cronk and hooker Cameron Smith has been the nucleus of three minor premierships, seven grand final appearances and two Telstra Premiership titles since Bellamy took the reins in 2003.

But now Cronk has moved to the Sydney Roosters and Bellamy has two young halves – Brodie Croft and Ryley Jacks - vying for to be Cameron Munster’s scrum-base partner. Munster is a certainty to be Melbourne’s five-eighth after playing the house down in the No.6 jersey in 14 of his 21 games for 2017.

“The way Cameron Munster finished the season at No.6 he’s definitely going to keep that position, as long as he comes back (from World Cup) in decent shape and is ready to play,” Bellamy told NRL.com.

“I’d imagine Brodie will get first go at (No.7). He did a really good job when he played there for three or four games, so he gets first shot. We’ve also got Ryley Jacks there and some other younger blokes.

“Jahrome Hughes can play a few positions in the backline and another young kid (former Australian Schoolboys half) Scott Drinkwater has played a bit in the halves and at fullback. He’s a pretty exciting player as well. So between those guys we’ll find something.

“They’re not going to be Cooper Cronks as no-one else is. They’ll be their own person and bring their own strengths to the team.”

If it is Croft who gets the nod for round one in Perth against the Canterbury Bulldogs, he will have plenty of experience alongside him in the Storm spine as Smith and veteran fullback Billy Slater continue their record-breaking careers.

Smith is coming off a busy 2017 in which he reached 2000 career points, played his 350th NRL game and broke Darren Lockyer’s 355-game record in the first week of the finals. And that’s not mentioning his breakthroughs in the representative arena – his 50th Test and his 40th Origin.

Slater regained his mantle as the best fullback in the game, capping off his comeback year by starring for the Kangaroos in their march to World Cup glory.

Apart from Cronk, the Melbourne back line will remain unchanged from the grand final triumph.

Bellamy will have to plug some holes in his pack after losing Tohu Harris (Warriors), Jordan McLean (North Queensland), Slade Griffin (Newcastle), Dean Britt (South Sydney), Robbie Rochow (Wests Tigers) and Nate Myles to retirement on the back of Kevin Proctor’s departure to the Gold Coast Titans the previous year.

“We’re going to miss Tohu and Jordan, they are international players. We knew we were losing them earlier in the season so hopefully we’ve found the guys to replace them,” he said. “Joe Stimson did a really good job for us this year, as did Felise Kaufusi.

“We’re getting Ryan Hoffman back and we know he can do a good job on the edge. We’ve brought in Patrick Kaufusi who can play both positions – in the ruck and on the edge. And Sam Kasiano is coming along nicely.

“So while we’ve lost some good players, Joe showed us a lot of good qualities during the season and then on the other end of the spectrum Hoff [Hoffman] is very experienced and knows what’s going on. He’ll get a new lease of life with all these younger guys and we’ll go from there.”

Forwards like Dale Finucane, brothers Jesse and Kenny Bromwich, Nelson Asofa-Solomona and Christian Welch are under contract beyond next season while upcoming free agent Tim Glasby will be a top signing priority in 2018.

Along with all the questions about “How are you coping without Cronk?”, Bellamy will be asked ‘’can you win back-to-back titles?’’ many times over the coming months.

Bellamy went through that following his side’s 2012 grand final win over Canterbury Bulldogs. He felt the slings and arrows that come the way of those in the spotlight.

After winning seven straight to start 2013, Melbourne won just four of the next 11 before losing to South Sydney Rabbitohs and the Newcastle Knights in an unhappy finals campaign.

The memories are hazy for Bellamy, which means he’s not actively changing anything this time around.

“In the end, last year is over now. The premiership race is over. Those memories of the win over the Cowboys will be with our guys for the rest of their lives but what happened last season isn’t going to help us this season.” 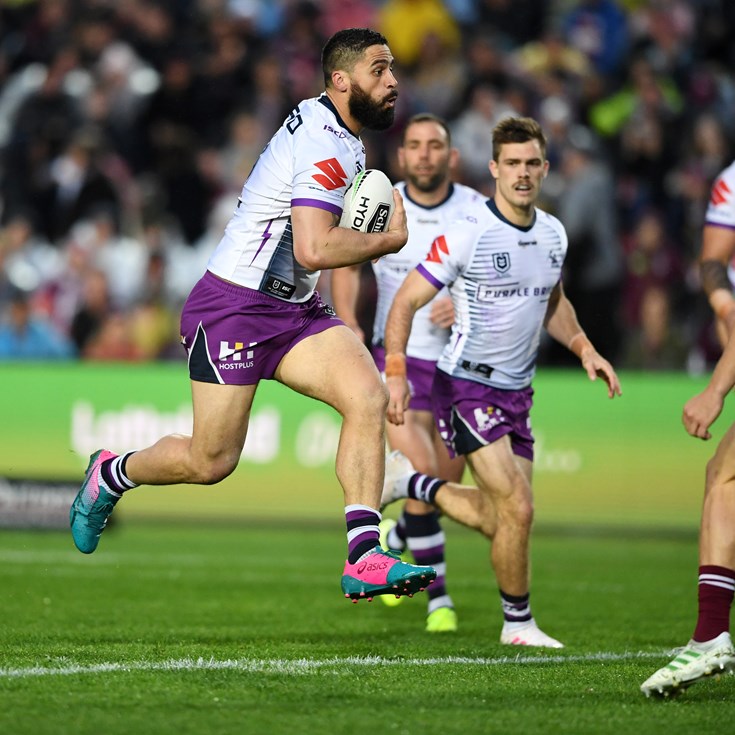