By his own reckoning, 2017 was “a crazy year” for Melbourne Storm youngster Ryley Jacks. And he’s not expecting things to change next year.

Let’s recap the former Easts Tigers junior’s year. He wasn’t originally a member of Melbourne’s 25-man NRL squad but still made his debut in round one of the Telstra Premiership against the Canterbury Bulldogs.

He was given the chance to be roommates with one of his high school idols. And he almost played in two grand finals within the space of a week.

Jacks wore the No.7 jersey for the Sunshine Coast Falcons – the Storm’s Queensland Cup feeder team alongside Easts – in the Intrust Super Cup grand final against the Papua New Guinea Hunters. Then he was named 18th man for the Storm in the NRL grand final team to play the North Queensland Cowboys.

“I just got signed by the Storm and came down here to do pre-season which is probably the hardest thing I’ve ever done … a Storm pre-season. I was pretty pleased just to get through that but then they surprised me again by picking me in round one. I was not expecting that but it was very special.

“I ended up getting 12 games in the NRL, when I didn’t think I’d get one in my first year here. Then I ended up just getting beaten in the [QRL] grand final with the Falcons. After losing a grand final at Suncorp Stadium on a Sunday I then had to fly straight back to Melbourne and was named 18th man with Storm for the following Sunday.

“It was something I’ve never had to cope with before. It was very mixed emotions that week. But it was kind of good. I flew up to Sydney on the Wednesday with Melbourne and went into camp. So I couldn’t think too much about the [Falcons] loss. I got to warm up with all the Melbourne boys and experience the team winning the grand final.

“So it was a weird and good week all in one. The whole year was like that.”

And the upcoming season might be more of the same – trying to secure a spot in the Storm’s NRL side while making appearances with the Falcons.

Besides the NRL debut, the other shining moment of 2017 for Jacks was playing alongside, and rooming with, Cooper Cronk.

“It was obviously unreal to get that opportunity to play with him,” the 25-year-old said.

“I was lucky to be his roommate. That was also awesome for me because Coops was one of my idols. He went to my school (St Laurence’s College, Brisbane) and stuff, obviously a few years before I was there, but I’ve always looked up to him.

“It might have only been eight games but I got to see how he prepared from everything like analysing oppositions to getting our plays down pat. He was astounding with his preparation mentally and physically and that’s one thing that will always stick with me: getting your body, and getting all the plays in your head, right before you go out there.”

Now that Cronk has departed the Victorian capital for the Sydney Roosters, it doesn’t mean Jacks’s pathway into the Storm halves is an easy one. It’s a case of three players (Jacks, Brodie Croft and Cameron Munster) for two positions. Jacks played halfback for the Falcons and mainly five-eighth for Storm last season.

“It doesn’t really bother me, No.7 or No.6 as I see it as pretty much the same role these days,” Jacks said. “This time of the year it’s all about training hard and getting fit. You don’t worry about round one until it gets closer.

“But [the rivalry] does make you train harder. Me and Brodie are working hard and while Cam [Smith] is not here yet, he will be soon enough. We’re all pretty close when we train. It’s in the back of your mind there are spots up for grabs. It will push us all.”

Jacks left a mark after his 12 games – eight straight to start the season and then four scattered around State of Origin and injury. He played nine at No.6 and three at No.7. He also made two line breaks, five tackle breaks and scored a try. Considering he made 284 tackles at an average of nearly 24 a game, only missing 16 was an impressive effort.

“My defence has been going pretty good so I want to keep that going. The back-rowers will find the halves all day long,” Jacks said. “Defence in the NRL is relentless.

“In attack, I just want to make more of an impact maybe. I’ve been trying to work on all those little things like passing, kicking.”

As for what 2018 will bring, in terms of splitting his time in the Intrust Super Cup and the NRL, who knows?

“I don’t really want to think about it all. I just want to train hard. Down here if you work hard, you get rewarded. [Coach] Craig [Bellamy] is very big on that, so that’s all I’m trying to do. Whatever happens during the year with the Falcons and the Storm, I’ve just got to keep playing well wherever I am,” he said. 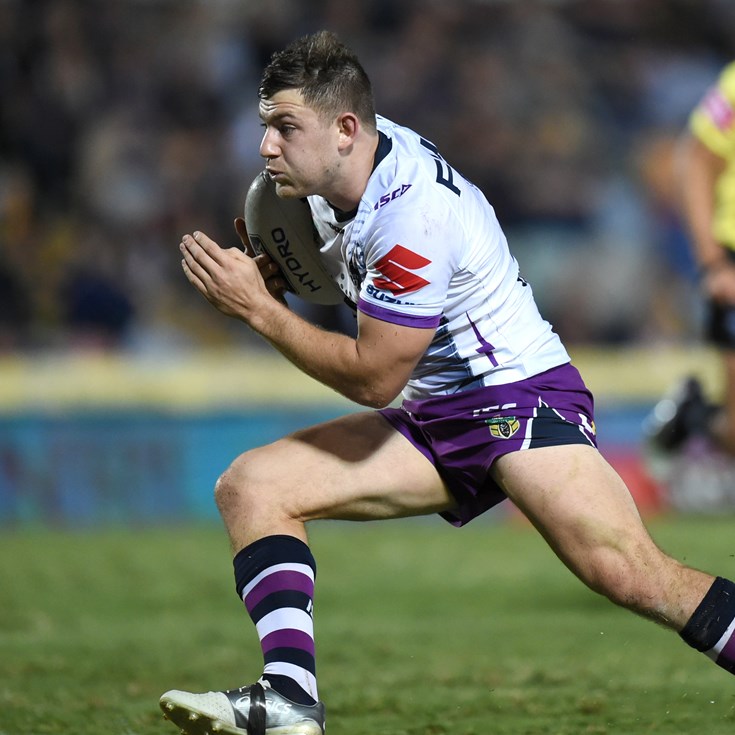 Jacks in halves frame for Storm with two Camerons out