In an Anzac Day clash arguably with more meaning than the Dragons v Roosters match in Sydney, both partners in the great military tradition are represented in this Storm v Warriors clash.

It was a vintage Storm performance in last weekend's win over the Roosters, with their relentless style of play eventually wearing down the Tricolours.

As for the Warriors, they took on the Dragons at their own game on Sunday and came up trumps. Any time you end a club's four-game winning streak you've got something to be proud of.

As usual, expect the Kiwi contingent at the Storm to again have a big say in the outcome of this match.

Storm: Melbourne will start 1-17 with one wrinkle. Coach Craig Bellamy has brought Tui Kamikamica into the starting side with lock Nelson Asofa-Solomona dropping back to the bench.

Ryley Jacks is the match-day omission with Chris Lewis named as 18th man.

Representative forward Dale Finucane will play his first match of the year after doing everything asked of him in the lead-up to the match.

Red-hot fullback Ryan Papenhuyzen (shoulder) is out of this week's squad with Nicho Hynes promoted from the interchange to take over in the No.1 jersey.

Trent Loiero, Dean Ieremia and Aaron Pene came out of the extended squad on Saturday and Chris Lewis was recalled to the reserves list.

The Storm have won their past 12 games at home venues.

Warriors: Boom youngster Reece Walsh will make his NRL debut in the biggest of a rash of late changes.

Walsh will start at fullback with Roger Tuivasa-Sheck moving to the wing and teenage debutant Rocco Berry goes into centre after being brought into the side on Saturday to replace David Fusitu'a, who remains sidelined with a hamstring injury.

Jack Murchie moves from centre to the second row and Ben Murdoch-Masila drops back to the bench.

And last, but by no means least, Bayley Sironen makes a shock appearance at halfback in place of Sean O'Sullivan. Edward Kosi is the 18th man

With Tohu Harris out of the side so Jazz Tevaga moves into the starting side at lock and Tom Ale joins the bench.

Injuries to Peta Hiku (dislocated shoulder) and Adam Pompey (ankle) forced a back-line reshuffle with Marcelo Montoya moving to the centres where he will be joined by Jack Murchie.

The Warriors have not defeated the Storm on Anzac Day since 2014.

Nicho Hynes v Roger Tuivasa-Sheck: With Ryan Papenhuyzen missing this clash Nicho Hynes has very large shoes to fill. While Papenhuyzen and Roosters ace James Tedesco have hogged the limelight among fullbacks so far this year  RTS has been going about having another stellar season. It may be his last in the NRL (for now), but the Warriors leader hasn't slackened off.

The Storm had nine players run for more than 100m in their win over the Roosters. Nelson Asofa-Solomona led the charge in that area with 150m from 14 runs. 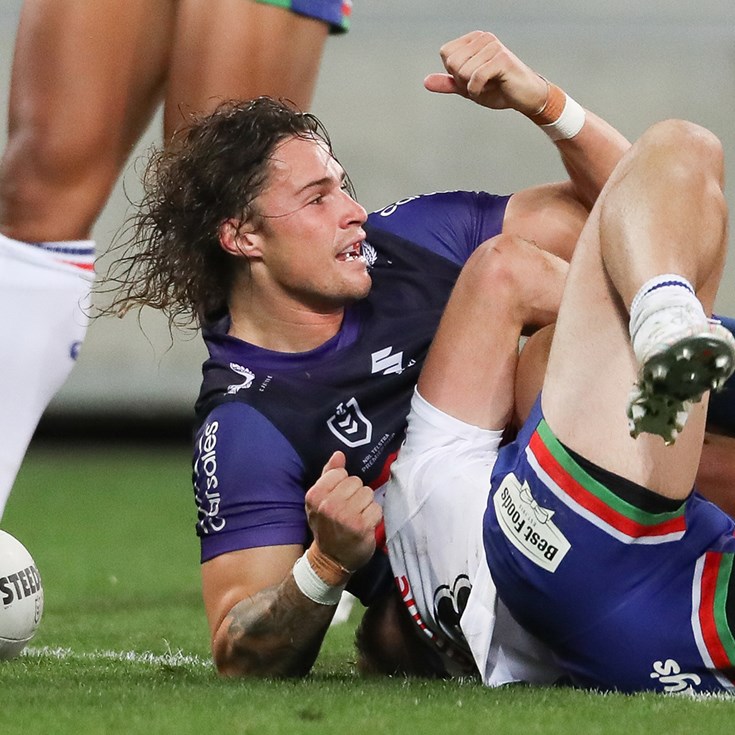