The Cowboys have to travel the virtual length of the east coast - Townsville to Melbourne - in their bid to win three games in a row for just the second time in 2019.

Buoyed by wins over the Panthers and Bulldogs in the past fortnight, they might be hoping Storm are just a little more subdued having wrapped up the J.J. Giltinan Shield already and being without five-eighth Cameron Munster (shoulder injury).

Coach Craig Bellamy will be tempted to rest some of his stars now the minor premiership is secured before heading into the first week of qualifying semi-finals.

North Queensland won't mind how many he rests if it means improving their prospects of winning their last game of the year after an injury-ravaged and disappointing season.

Then again Melbourne coach Craig Bellamy spoke last weekend of his team's pride in losing only four games after 24 rounds. He won't be keen to let a fifth creep in at the last minute.

Storm: Harry Grant comes on to the interchange bench in place of Tino Fa’asuamaleaui who drops out of the match-day 17 along with Billy Walters. Tom Eisenhuth is out with Joe Stimson joining the bench. Curtis Scott also dropped out of the 21-man squad on Thursday night. Cameron Munster's shoulder injury opens the door for Brodie Croft to return to the side in No.6 and he will partner Jahrome Hughes in the halves. Josh Addo-Carr has been rested, allowing Sandor Earl to get a start on the wing. The other change is on the bench, with Tui Kamikamica back from an arm injury and Brandon Smith being rested.

Cowboys: North Queensland will start their final game of the season 1-17. Corey Jensen and Reuben Cotter were the final cuts. Just one change to the team that beat the Bulldogs last week, with Josh McGuire returning via the bench from a three-week suspension. Reuben Cotter was dropped to the reserves to make room for McGuire. Tom Gilbert and Jake Clifford were trimmed from the reserves list 24 hours before kick-off. The Cowboys have lost nine straight to Melbourne.

Opposing wingers Kyle Feldt (Cowboys) and Suliasi Vunivalu (Storm) had nine tries apiece going into last weekend. But Felt scored against the Bulldogs while Vunivalu wasn't among the six Melbourne tries at Lottoland. These two players are cunning characters, who build their games around those smarts, plus aggression,  and not just their speed. Seeing them try to out-wit each other should be eye-catching.

It's the same as it is every week - Cameron Smith - who should change his nickname from 'The Accountant' to 'The Orchestra Conductor'. Smith wields his baton with his excellent service out of dummy-half - passes to the middle of the chest always - and his accurate choices. When he takes on the line, or decides to bamboozle the defences in other ways, it always seems to be the right option. With Munster out Smith becomes even more crucial.

For the Cowboys to win

Former Storm trooper Jordan McLean will want to ensure opposition props Nelson Asofa-Solomona and Jesse Bromwich remember how good he can be, when he returns to his former club's home ground. If he, Scott Bolton and Jason Taumalolo can be as impressive as they've been the last two weeks without Matt Scott, then the boys from the tropics have their platform to unveil a few surprises for Melbourne.

A celebration for Melbourne at home as they pick up the JJ Giltinan Shield. The Cowboys were good last week but I don’t think they have the game to challenge the Melbourne Storm. The interesting thing here is who the Storm use in the halfback and fullback jerseys. I think Jahrome Hughes and Ryan Papenhuyzen showed enough last week to suggest that’s how semi-finals week one will look. Storm by 10

To show the contrast in fortunes for these two teams in 2019, Storm leads the NRL in line breaks with 114, while the Cowboys are in 16th spot on 61.

Cameron Smith is two points - or a shot at goal - from becoming the third player this year to hit 200 points. Latrell Mitchell (Roosters) and Jarrod Croker (Raiders) are already there. 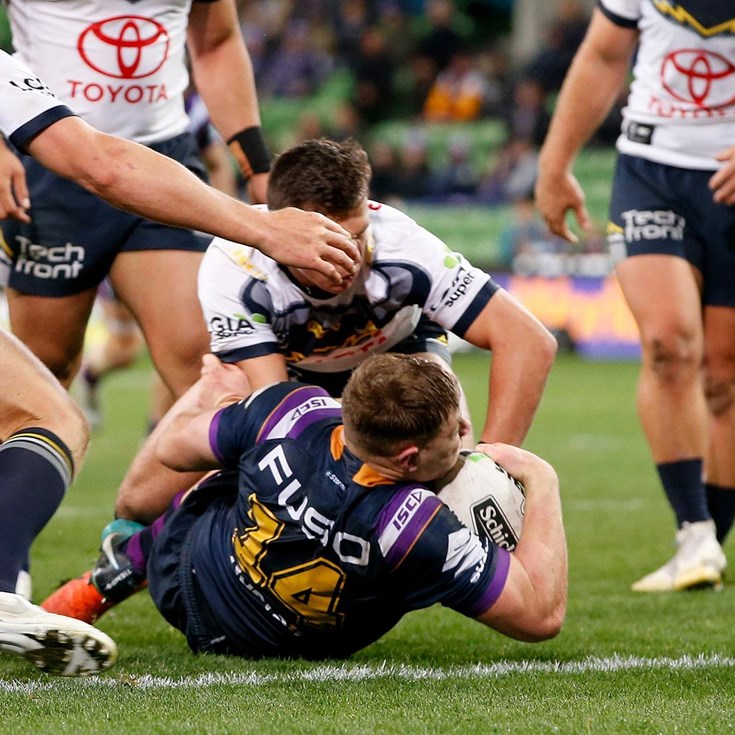 Asofa-Solomona continues his devastating form close to the line

Storm set sail for semis after taking care of Cowboys