From a sleepless night on a horror May 16 believing he'd torn his ACL, to getting the call on June 30 from Kevin Walters that he had secured a Maroons debut.

No wonder new Queensland prop Christian Welch said he had just experienced "a whirlwind six weeks" when he spoke for the first time as a fully-fledged Maroon at training on Tuesday in preparation for the State of Origin series decider at ANZ Stadium.

The 24-year-old Storm forward was also proud that his first training session at Langlands Park as a member of the Maroons' 17-man squad took place right next to his former school Villanova College and at the home of his junior club Easts Tigers.

But back to that May 16 night when Welch, and the Storm, feared he'd suffered an ACL injury during Melbourne’s 22-20 win over Wests Tigers.

With Origin I just around the corner Welch was certain his season was over, as it was in 2017 after he sustained the same injury. Thankfully the diagnosis proved to be premature and just a meniscus injury.

Munster set to be Maroons fullback in Origin III

"Originally they are pretty good with ACL stuff and diagnosing it. My mum came down last time [he did his ACL] to look after me because you are pretty incapacitated for a week to 10 days so I was texting the doc finding out what day we were going to have surgery.

"Mentally I thought I had done it, but then I had some great news the next day.

"To have the great news that it was only a bit of cartilage and get back in two and a half weeks from the operation was really great.

"The [strength and conditioning] staff at the Melbourne Storm were outstanding in my rehab and letting me be pretty aggressive with it. So it has been whirlwind six weeks and a dream come true to get the nod for Wednesday."

Welch was "a very happy man" on hearing that his season wasn't done and bought some lotto tickets to celebrate, although he is yet to check his numbers.

"I didn't bother checking because I posted it on Twitter, and the barcode, so I am thinking that if some lucky punter did get up they have got a nice little payday," he grinned.

Welch knew that the biggest pay-off would come if he put in the hard yards to get himself right to be in the Origin frame again, and he left no stone unturned.

"I think as a young Queenslander growing up and then in the NRL you always have goals to play in this team.

"I was really aggressive in my rehab and wanted to get back and play well for the Melbourne Storm to put my name forward as a chance to be picked," he said.

"I went and got an arthroscope and they went in and cleared out a bit of cartilage. I ditched the crutches after a day and then basically asked the physios 'I’ve ticked that box, righto what’s next?' I didn't want to waste a day.

"One of our bye weeks I stayed there and smashed my physio. I dragged my physio out for the weekend off and took him down to the park and did some physio runs because I had to train the whole week to be able to play the Warriors in New Zealand."

Welch, who was 18th man for Game Two in Perth, did get a pay-off beyond his wildest dreams on Sunday when the phone rang and a familiar voice was on the other end. It was a special moment in more ways than one.

"My dad was down in Melbourne for work so I picked him up and went for dinner. I kept looking at the phone all night and afternoon. I was just about to drop my dad to his hotel and the Kevvie called through," Welch said.

"It was really special to be with my dad in the car and to get the call together was pretty amazing. My dad was doing fist pumps trying to not make any noise on the speaker. I was driving, luckily, because I think he would have steered off.

"It was a special night to be there with dad when I got the call and then to call mum, who was with my grandparents and my auntie."

Welch is set to thrive under Walters and repay the faith of the Maroons coach who has been a mentor to him in recent years.

"When I played Queensland under 20s Kevvie was the coach and I suppose I have built up a bit of a relationship since then. He has really stuck by me in the emerging camp when I did my ACL in round nine [in 2017]," Welch said.

"He brought me into the emerging Origin camp that off-season which I was really grateful for. I went to my fourth or third emerging camp in a row and my parents were giving me shit [saying] 'how long can one person be emerging for'.

"I think I was the longest serving in that squad but I am really grateful that Kevvie persisted and kept bringing me into the fold and into the camps as 18th man last year and then in Game Two [this year]. It is a privilege being around this group."

Welch won’t be overcomplicating his role at ANZ Stadium on July 10, where the Maroons pack will need to stand up and be counted after a lethargic display in Perth.

"I am really excited. I've played in a few finals and there is a great atmosphere to those. I expect nothing less on Wednesday week down in Sydney," Welch said.

Welch has also developed into something of a role model. Students from Villanova College were on hand to watch their idol train.

"It is good to see some kids from my old school come down. It is a rugby union school but they have just started to branch out into rugby league which I am really pleased about," Welch said.

"It is amazing the journey since leaving Villanova and going down to Melbourne and coming into my first Maroons side. It is a bit surreal at the moment but I am soaking it all up. I love my old school and I love my old club Easts. I am really proud." 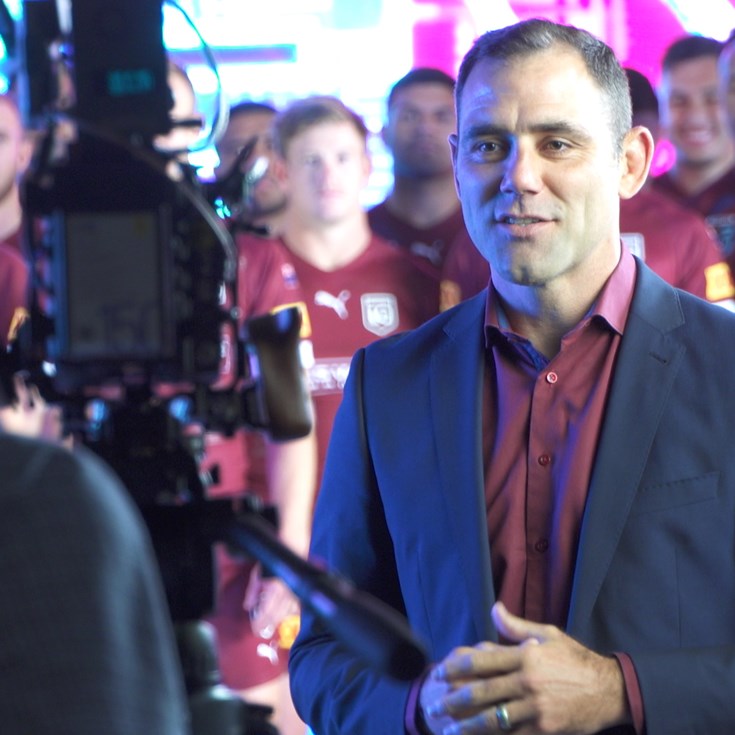 'He was too nice' - How Welch developed Origin-like qualities