With the odds firmly stacked against them, the Melbourne Storm produced one of their all-time best post-Origin performances to beat the Warriors 32-10 on Saturday night in Auckland.

Already hampered by having four players backing up from Origin I three days earlier, Melbourne lost halfback Brodie Croft to a game-ending head knock midway through the first half, as well as having to play 10 minutes a man down, following Christian Welch's sin-binning in the 56th minute.

Fullback Jahrome Hughes was a standout, scoring a pair of tries in the five minutes either side of half-time which broke the back of the Warriors, even though they led 10-8 at the break.

Lock Dale Finucane was also immense for Craig Bellamy's side, running for 195 metres and making 34 tackles in his 72 minutes on the park.

Melbourne's eighth-straight victory over the Warriors sees them retain the Michael Moore Trophy and remain clear at the top of the Telstra Premiership ladder after 13 rounds.

Earlier the Storm had completed a perfect 18 from 18 sets through the first 40 minutes, with Cameron Smith giving them the initial lead via a penalty before the Warriors hit back with consecutive tries.

First Ken Maumalo finished down a narrow corridor after Kodi Nikorima created an overlap down the left, before Nikorima got on the end of a Blake Green kick, with Issac Luke converting the second effort. The home side was flying 10-2.

Having defended brilliantly on their line up through the first half hour, the Warriors finally cracked after back-to-back sets, which came about after Chris Satae's late shot on Josh Addo-Carr, resulting in the winger being sent for a HIA and Satae being placed on report.

Vunivalu dives over on the right

Hughes scored on the very next set, thanks to some clever dummy-half deception from Cameron Smith, who also converted to leave the Storm trailing by just two at the break.

Less than three minutes into the second spell Melbourne took the lead back, with Hughes flying through a yawning gap created by Brandon Smith's pass.

Tries to Suliasi Vunivalu and Jesse Bromwich, the second while the Storm were down to 12 men, put the result beyond doubt, before Marion Seve added a fourth Melbourne try two minutes from time to cap a memorable night.

The Warriors' eighth loss of 2019 came with a familiar theme, as Stephen Kearney's men failed to score over 12 points for the sixth time this season. 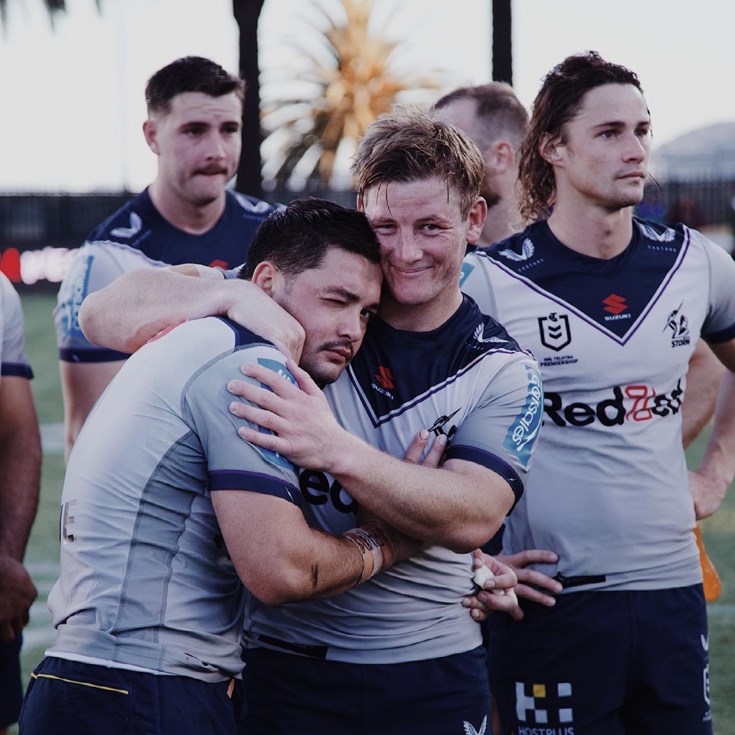