All the play by play action from Melbourne's Round 5 meeting with the Tigers in Auckland.

4' Another clever kick forces Billy Slater to take the ball dead. Wests Tigers on the attack with their third set in a row

5' Nice tackle Suli! Naiqama drops the ball as he attempts to run into a hole

6' Penalty as Matulino is caught offside next to the play the ball. We're on the attack for the first time today

8' We don't make the most of our good field position. Croft's pass for NAS is taken by Chris Lawrence and we lose possession

11' Nearly a Cameron Smith 40/20! It falls just short but will force the Tigers to play out from defence

15' Suli looks ON today! Huge run for us out of defence then a big fend off!

16' Curtis Scott tackled in the air as Croft goes high. Penalty and we'll get a new set

17' Wow! Blink and you'll miss that. Checking a potential try to Young Tonumaipea with the video referee. No try ruled. We do get a penalty for interference against Luke Brooks though. Another chance to open our account and we'll kick for points.

18' Croft slots the penalty goal and we take the lead! Storm 2 Tigers 0

20' It's all happening! Great pressure to force the Tigers to lose the ball - we then return the favour and spill it as Billy Slater darts towards the try line

21' Errors starting to tally up in the first half. Tigers follow suit with another knock on and we'll settle back into possession

23' Our attack still can't quite click into gear. The Croft pass finds the grass and we then knock on as Jesse tries to regain the ball

24' Smart kick from Cameron Smith and a huge kick chase from JAC! Penning the Tigers inside their defensive 20

26' The Marshall kick causes havoc in the air. The wicked bounce falls to Watene-Zelezniak and Suli comes up with a try saver!

28' Amazing kick from Cameron Smith but Lolohea saves it from being a 40/20. Things have gone up a notch here in Auckland

29' The short ball nearly comes off! Kaufusi and Croft go close to combining and breaking through. Instead Tigers end up back in possession

35' The Benji Marshall kick gives JAC a headache - his attempted flick pass to keep the ball in can't find Billy and the Tigers intercept to score. Lolohea misses the conversion. Storm 2 Tigers 4

38' Josh is involved in everything at the minute. Munster kick's for him on the left wing and we nearly respond immediately

CLASS. What a set play off the scrum!

39' SET PLAY!!! WOW! Billy Slater scores from the Munster kick on the first tackle! Smith nails conversion and we hit back on the stroke of half time. Storm 8 Tigers 4

HALF TIME: A scrappy half but some gold approaching the break sees us lead.

43' Nice start, a repeat set for us! It doesn't come to points but a good chance to build pressure and earn some early field position

50' We're holding the territorial advantage now. Although can't make the most of a fresh set in attack with a stray Croft pass hitting the ground.

54' Both sides trade errors and we then propel forward trying to extend our lead. Tigers defence holding strong at the minute though

57' Jesse Bromwich breaks the line and Munster gets a penalty after being held back. We will look to kick and extend our lead

59' A mix up from the Tigers kick off and we can't touch the ball before it goes out. Goal line drop out for the Tigers

61' The Tigers make us pay. Lawrence scores on the left edge. Converted by Lolohea. Storm 10 Tigers 10

65' Penalty and we're propelled forward. We throw the ball around on the last but the Tigers defence again holding firm as we try and break the deadlock

66' Repeat set for the Tigers. Kaufusi spills the Brooks kick and we have to force the ball dead

70' Benji Marshall looked certain to score but KENNY BROMWICH comes up with a try saving tackle!

73' We take the crack at the field goal through Croft but miss. Tigers with a 7-tackle set

79' We kick wide for JAC but the bounce doesn't kick up for him and the ball goes dead. Time running out for us now

We have a week to turn it around #purplepride #Craig400 pic.twitter.com/R9KwRAEQtF 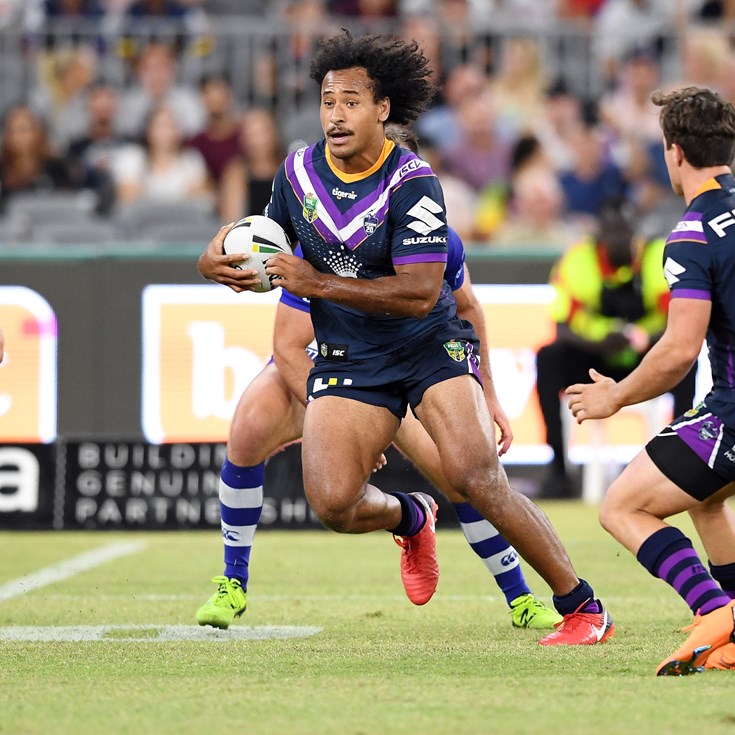