"Maybe Melbourne are impossible to beat," the Manly maestro mused on Thursday.

Hasler looked a right Nostradamus as Brandon Smith ran riot in a three-try, 13-minute opening barrage that skewered the Sea Eagles, and doubly so by Saturday morning when the NRL's number one No.9 reported fears of a facial fracture could be put to bed.

Only a heavy head clash with Josh Aloiai could stop Smith as he laid on two try-assists in a brief but devastating cameo, but post-game concern of another bad break took some gloss off what was truly a glorious Storm performance.

Smith has suffered two facial fractures already in his career, but wrote on Instagram that he has been given the all clear and is targeting Melbourne's seventh straight preliminary final after a 40-12 dusting of Manly.

"Great result last night, even greater result from the doctor that there was no facial fractures. Bring on the Pre Lim," Smith wrote.

Even if subsequent scans and recovery to put Smith in doubt in a fortnight's time, the optics could hardly be better when Harry Grant comes in as replacement.

Especially as Cameron Munster put aside yet another pre-game injury cloud to put the cleaner's through a miserable Manly right-edge, and Ryan Papenhuyzen thoroughly outpointed Tom Trbojevic – with a 24-point haul of his own.

For Manly, everywhere you looked, it looked bad.

Poor old Morgan Harper was left looking for a hole to jump into after two fumbles paved the way for Storm tries, while Tom Trbojevic simply couldn't get a look-in as the Storm raced to a 24-6 half-time lead.

Trbojevic's first touch of the second saw him manhandled over the sideline by four Storm defenders and even though a penalty was blown with Melbourne deemed to have gone on too long with the tackle, the message was plain.

After dominating a regular season like few ever have, Manly's fantastic fullback was being rendered a passenger by the defending champions.

At least he had company. Isaac Lumelume's runaway try after just two minutes, followed by Kenny Bromwich crocodile rolling his way through a Harper tackle shot the Sea Eagles to pieces early.

When Smith sent Christian Welch through the defence on an outside-in line, Melbourne weren't just keeping pace with the clock, they were leaving it for dead.

Significantly for the Storm, Munster was in the thick of things down their left-edge, once more putting aside pre-game fitness concerns – this time an infected knee – to make Harper's life a misery.

"Cameron's got a lot of skill and he's got great knowledge of the game, but his strongest trait is how hard he competes," Bellamy said.

"He's a real competitor and was definitely that tonight. He came up with some big plays for us."

Even better was Papenhuyzen, who is no longer warming up after his lengthy concussion lay-off.

Papenhuyzen breaks through on the left edge for Melbourne

The Storm No.1 is red hot once more, his tries either side of half-time breathtaking for the speed and poise with which he streaked away from would-be defenders.

Just as sweet, the 40-metre-plus drop-punt he nailed to bag two more points for the road in the closing seconds.

"What we know [Papenhuyzen] can do, we didn't know how long that would take physically [to return]," Bellamy said.

"But the mental part... no one had any certainty on how long that would take to come back. The last two weeks he's been pretty close to what we expect of him and what we know of him.

"He was tremendous tonight. He came up with the big play of the game with his try right on half-time. Manly were sort of getting back into the game there."

Manly found a double of their own through towering winger Jason Saab to give the faintest flickers of hope.

His second in the 50th minute came from the one notable Storm blemish of the night, an unfortunate Lumelume fumble when Rueben Garrick had optimistically hoiked a kick re-start downfield, Saab duly swooping on the error.

But by the time Manly were able to come calling again, a poor pass from Tom Trbojevic left Garrick a sitting duck to be shoved over the sideline.

In between Josh Schuster landed himself on report for a lifting tackle on Jahrome Hughes that the match review committee will no doubt examine.

The exchanges told the tale. With Melbourne in sublime form, Manly simply submitted, proving to be their own worst enemies when it suited too.

One loss does not a season make, and maybe this entire performance is best simply forgotten now sudden-death finals football truly starts for Manly, against the winner of Saturday's Roosters-Titans clash.

A frustrated Trbojevic – two errors, only two tackle busts, one offload, roughly 100 less running metres than he normally manages – was well and truly brought back to the field, and thoroughly outplayed by Papenhuyzen.

From 1-17 and to a man, Melbourne prevailed in every single match-up as they marched to within one win of a fifth grand final in six years.

Sounds a tad unbeatable doesn't it? 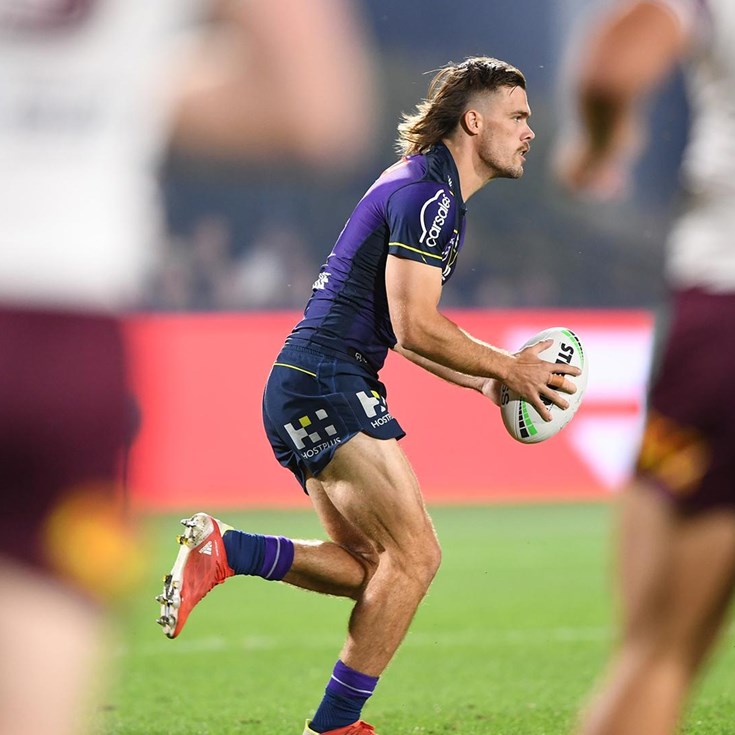