It was supposed to be a historic night with the Storm to become the first team to ever record 20 straight wins.

Instead, Parramatta - who were written off by all and sundry a matter of weeks ago - emphatically reasserted themselves as title contenders with an astounding 22-10 victory at Suncorp Stadium.

And the ramifications for Melbourne could extend into the finals with three players placed on report: Jesse Bromwich (crusher tackle on Isaiah Papali'i), Harry Grant (hip drop on Makahesi Makatoa) and Brandon Smith (high tackle on Marata Niukore).

The Eels took away concerns too with lock Nathan Brown (high tackle on Tom Eisenhuth) and Keegan Hipgrave (dangerous tackle) to also come under scrutiny from the match review committee.

Adding to the potential fallout, star Storm winger Josh Addo-Carr went off in the 48th minute with a minor hamstring injury.

Parramatta captain and fullback Clint Gutherson limped off late in the match but he downplayed the issue at full-time.

"I just couldn't extend into a run and it just felt like my whole leg was vibrating. Hopefully, it's just a cork underneath … I should be right," Gutherson told Fox Sports.

Coach Brad Arthur confirmed he would rest Gutherson, who will have scans, for next week's match against the Panthers.

The Storm had the chance to break the Jack Gibson-coached 1975 Eastern Suburbs team's record of 19 straight wins as well as locking up their fourth minor premiership in six years.

But the Eels served it up to them physically and rediscovered their early-season zip and commitment, scoring first and earning the two competition points with some remarkable cover defence.

Ferguson on the outside of Smith for his double

Recalled winger Blake Ferguson bagged a double as the rejuvenated Parramatta took their opportunities to break the Storm wall.

It was the second time this year they've defeated Melbourne.

"That was a strong performance and I saw it right from the start of the week; we had a real intensity about what we did during the week and we had a real level of focus," Arthur said.

"And then I saw it when we got in here tonight as well. I just knew they were on and I knew that we'd have a red-hot crack.

"I couldn't guarantee we'd get the result, but I was very confident in the style of performance that we were going to put out. We've got a lot of suffering members and fans back in Sydney and that was for them."

Halfback Mitch Moses was outstanding, so too five-eighth Dylan Brown and Gutherson as the playmakers stood up.

"[Moses] was very good. It's good for his confidence," Arthur said.

Storm strike back through Reimis Smith

"People target him over the big games and he produced in one of the big games for us. I was super proud of him and so happy for him that he was able to play like that.

"And then he had to go back to fullback when our skipper went down. But all that [said], our three starting middles were unreal tonight: Junior [Paulo], Isaiah [Papali'i] and Nathan Brown."

It was only two rounds ago that Arthur fronted a press conference seemingly unsure of how to get Parramatta's campaign back on track after they were flogged 56-10 by the Sea Eagles.

Gutherson and others to be given a break by Arthur

"We didn't want to say anything dumb straight after that performance because it wasn't good enough.

"And we didn't see that for those three or four weeks ... I don't know why it wasn't there, but it's there at the moment.

"Hopefully, we enjoy that feeling."

The result gives the Panthers renewed hope of pipping the Storm at the post in the race for the JJ Giltinan Shield.

Some Moses perfection for Ferguson

Penrith can join Melbourne on 42 points with a win over Wests Tigers on Sunday but Craig Bellamy's team boast a superior differential and would only need to beat the Sharks to finish first.

Parramatta, meanwhile, currently sit fourth on 32 points (ahead of the Roosters on differential), but the Sea Eagles will pass them on for-and-against if they beat the Bulldogs as expected on Sunday.

"It's weird, the last month – I've said it before – it just hasn't felt like we're too far away," Gutherson said.

"The results probably don't reflect that, but as a group and as a club, we knew that it was there and we just had to do it.

"Tonight everything sort of worked. We've still got a lot of improvement going into Penrith next week. They're the games you want to be playing in at the back-end of the year." 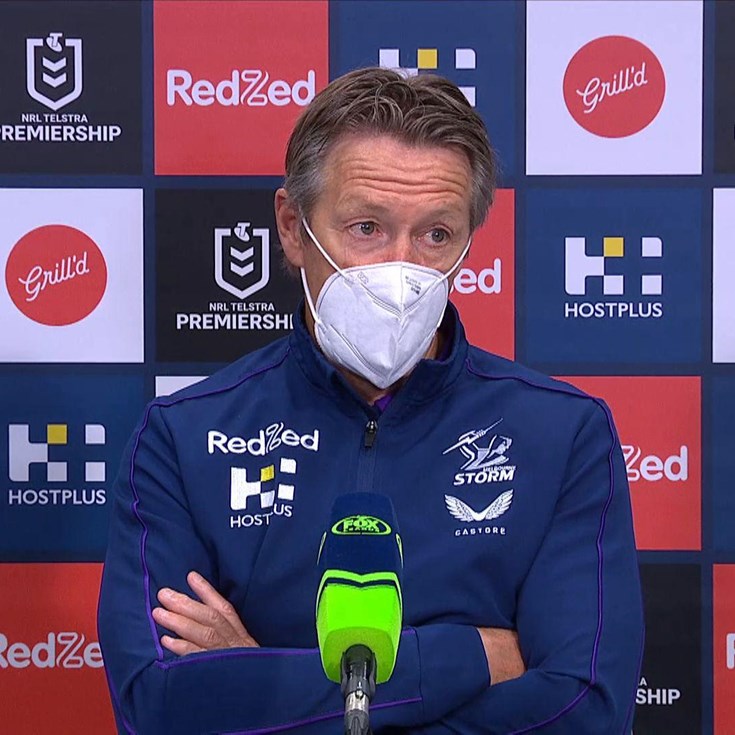