The Melbourne Storm have downed the Titans 34-20 at Cbus Super Stadium on Thursday night to etch their name in the history books with a 19th consecutive victory.

The Storm now stand alongside the 1975 Eastern Suburbs side with the longest winning streak of all time but they had to fight back from 10-0 down early to achieve the milestone.

"We didn't put too much energy into thinking about the record but I'm really proud of this group for being able to win 19 in a row," Storm coach Craig Bellamy said.

"That's hard to do in any era I'd imagine but certainly the era we're in now... I'm really proud of the playing group for what they've done.

"It hasn't been pretty at times but that's how footy goes. There's up and there's downs, like anything else in life, so to be able to win 19 games in the circumstances we're in, I'm really proud of this group."

A powerhouse run by Titans centre Patrick Herbert set up the opening try for Greg Marzhew in the third minute and livewire fullback Jayden Campbell had the Gold Coast's second soon after thanks to more good work from Herbert.

A bomb by returning halfback Jamal Fogarty was tapped back by Herbert and it was Campbell who pounced and raced away to score.

Down by 10 the Storm hit back through Marion Seve in the 24th minute after great lead-up work by Ryan Papenhuyzen and Josh Addo-Carr.

Melbourne hit the lead four minutes later when Harry Grant surged over from dummy half but the Titans proved they were up for the contest when Campbell flew high to catch an Ash Taylor bomb to complete his double.

The last time the Storm trailed at half-time was back in round eight against the Sharks, when they turned an 8-6 deficit into a 40-14 win.

On that night at AAMI Park it took them just six minutes of the second half to get back in front through Tom Eisenhuth and on Thursday night it was Cameron Munster getting over from close range in the 46th minute to level the scores. Papenhuyzen's conversion from wide out put the Storm up 18-16.

Munster's second-half performance simply oozed class and he finished the night with 146 metres from 19 runs along with two line breaks, one try assist, one try and 30 tackles thrown in for good measure.

"If Cameron hadn't have come up with the second half he came up with, I don't think we would've got the points," Bellamy said.

"He's been through an Origin series as well, I think he had one week off, but other than that he's played all the games ... some guys come out of Origin reasonably quickly and some don't, and Munster has always been a guy it takes a bit of time to get out of Origin because it flattens them physically and it flattens them mentally."

Papenhuyzen was another shining light for the premiers in his first game in the starting side since returning to the field in round 19.

Papenhuyzen and Addo-Carr turn it on for Seve

"That was always the plan, not to rush him back. We had to build his confidence slowly and surely," Bellamy said of his No.1 gun.

"We knew other teams would go after him so just getting his fitness and his involvements up in the last three weeks was our main aim. We always had this game picked out as the one he would start in, even though we didn't expect Jahrome [Hughes] not to play.

"I thought his involvements tonight were really good and I was really happy with how he played, It was pretty tough for him in the first half, we didn't play well and we were a bit all over the shop so he probably struggled there a little bit, but he made a lot of steps forward tonight.

No pressure: Bellamy and Storm never planned to rush Papenhuyzen

With the game in the balance the Titans made a fatal error in the 57th minute when Campbell played the ball 15 metres out from his line and there was no dummy-half so Kenny Bromwich dived on the ball.

The Storm made them pay in the next set when Papenhuyzen delivered the final pass for Addo-Carr to score his 22nd try of the season.

Addo-Carr then turned provider when he used some light stepping to bust the Titans down the left side and found Nicho Hynes in support to make it 28-16 to the Storm.

With 10 minutes remaining, Munster left David Fifita in his wake and set Addo-Carr up for his second of the night and a club record equalling 23 for the season.

"It's obviously very humbling [to equal the record], it was a bit of a weird game, a pretty average start but Craig gave us a rev at half-time and the boys responded really well," Storm captain Jesse Bromwich told Channel Nine at full-time.

"Our spine players stood up and took over the game and I'm just really proud of the boys and very humbled to equal the most wins in a row."

With halfback Jahrome Hughes missing after copping a high shot last week and Brandon Smith and Justin Olam resting, the Storm attack looked out of sorts at times but they still had enough class to etch their name in the record books alongside Artie Beetson's Roosters.

Something special from Jayden Campbell

The Storm will look to make the record their own when they play the Eels at Suncorp Stadium next Saturday night.

The loss leaves the Titans clinging to eighth spot on 20 competition points, equal with Canberra who play Manly on Friday night and two clear of the Sharks, Dragons, Wests Tigers and Warriors on 18. 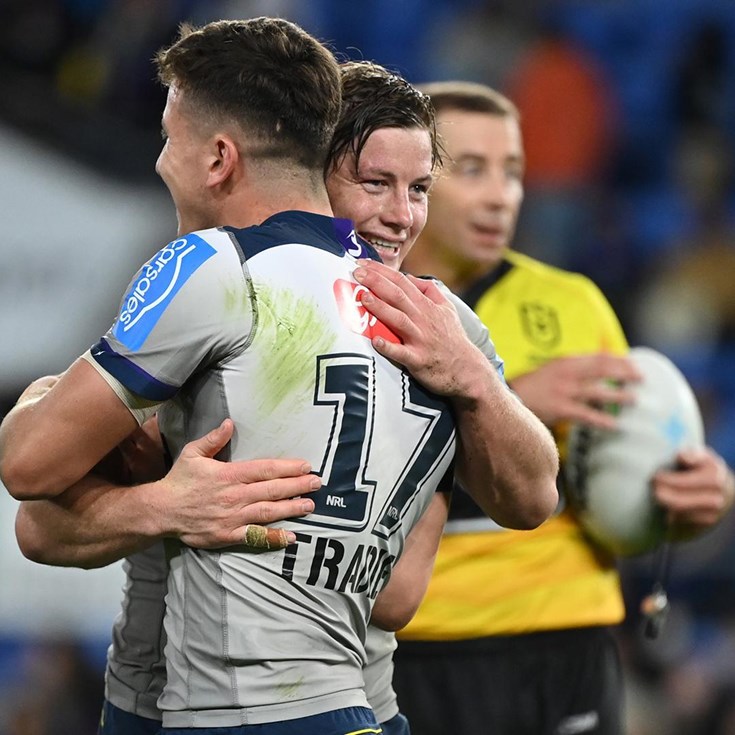 No pressure: Bellamy and Storm never planned to rush Papenhuyzen