Canberra gave ladder leaders Melbourne a huge scare at Sunshine Coast Stadium on Thursday before the send-off of Corey Harawira-Naera in the 76th minute for a high shot ended any hopes of an upset.

In the end the Storm prevailed 26-16 but they had to survive a Jack Wighton-inspired comeback from Canberra before registering their 18th win on the trot.

"Canberra always come and play well against, it's been a big rivalry obviously since Ricky Stuart's been at the club, he and Bellyache [Craig Bellamy] go head to head all the time and they know each other's game really well," Storm five-eighth Cameron Munster told Channel Nine post-match.

"They played well tonight and we needed to play a little bit gritty just to get the win."

After giving up an early try to Raiders winger Bailey Simonsson, the Storm quickly hit their straps, with hooker Brandon Smith getting over from dummy half in the 10th minute.

Five minutes later the Storm produced a long-range try down their right edge with Dean Ieremia taking a gem of a pass from Reimis Smith 45 metres out and leaving Jarrod Croker and Jordan Rapana in his wake to finish the movement.

Munster stamped his class on the match when he put Chris Lewis in with a great offload and the Storm had raced to an 18-4 lead.

A penalty goal to Nicho Hynes in the 32nd minute made it 20-4 and that's how the teams went to the break after Raiders centre Matt Timoko blew a late chance when he spilled the ball over the line.

The Raiders came out firing in the second term with five-eighth Wighton setting up Simonsson for his double and the gap was back to 10 points.

Seven minutes later the Green Machine were in again when Ieremia allowed a Sam Williams bomb to bounce and Wighton picked up the scraps to send Simonsson over for his third try.

In his first game back from a five-week absence due to a toe injury, Simonsson had his first career hat-trick and the Raiders had the Storm looking over their shoulder at 20-16.

"We just lost the plot there in the first 20 minutes of the second half," Storm coach Craig Bellamy lamented post-match.

"Then by the time the last 20 minutes came we tightened up a bit but it was hard to get the momentum back.

"I was disappointed with our thought process of how we started the second half but when the Raiders got the momentum we somehow found a way to halt that momentum and steady the ship."

Harawira-Naera sent off for high tackle

Consecutive high tackles by Tom Starling and Josh Hodgson in the next two sets handed Ryan Papenhuyzen the chance to extend Melbourne's lead to six with a penalty goal.

The Raiders then failed to find touch from a penalty and another high shot by Hodgson gave Melbourne the field position they needed to turn the screws.

Reimis Smith and Justin Olam both went close to scoring before Harawira-Naera charged out of the line and connected with Hughes's head to earn his marching orders. Papenhuyzen landed the penalty goal for 26-16.

"Jahrome's not well, he can't remember anything about the game and doesn't look too good, so it's obviously a fair knock that he's got," Bellamy said.

"I didn't actually see the tackle, we were just trying to get some changes done at that stage. I caught the collision but I didn't see it that closely so I don't want to comment on the tackle."

Both sides had earlier lost a star player to head knocks with Storm lock Dale Finucane lasting just two minutes before he was forced off and Croker failing his HIA during the half-time break.

Ieremia into space and over for another Storm try

"We took a bit of a knock there when Dale went off, he's our man who plays the big minutes," said Bellamy.

"To lose him we were sort of hanging on a little bit but a lot of the other guys made up for it and we got there in the end but it was a fairly ugly game."

The Storm set a new club record for most points in a season and will look to equal the all time record of 19 wins in a row held by Arthur Beetson's 1975 Roosters side when they tackle the Titans next week.

Canberra, meanwhile, will be looking to repeat their round 17 heroics at 4 Pines Park when they face the Sea Eagles in a clash that will have a huge bearing on their top-eight aspirations. 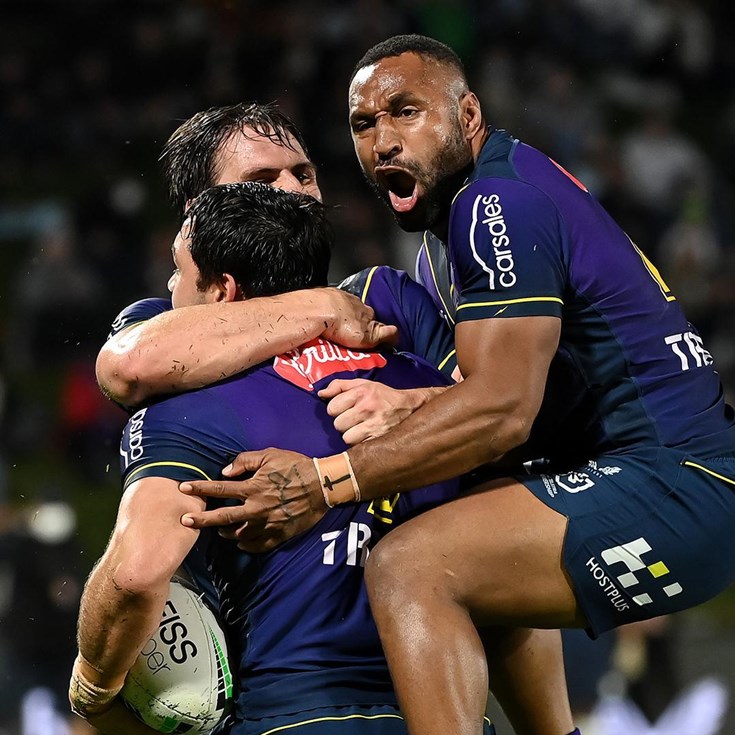