Melbourne overcame their stiffest test in several months against one of their oldest foes in Manly to come away 28-18 winners at Suncorp Stadium on Saturday and poke their nose out in front on the NRL competition table.

With the Panthers and Rabbitohs enjoying victories this weekend, they had drawn level with the Storm on 36 points. But Craig Bellamy’s men are clear once more with a fifth minor premiership beckoning.

But it wasn’t easy. It was the first time since round eight against the Sharks that Melbourne didn’t have the lead at half-time. Scores were level twice at 8-8 and 14-14 giving an indication of the closeness of this contest. Manly held the lead (14-8) for 10 minutes of the second half.

"It's been the first time for a while we've been behind in a game, when we've played a highly-placed team," Storm coach Craig Bellamy said. "But I was happy the way they hung in there and even lifted our game really - that was a really pleasing part."

In the end, it was a Cameron Munster try 12 minutes from full-time that proved the difference.

Much of the lead-up centred on how Melbourne would contain Tom Trbojevic. And while he was subdued more than other teams have been able to do – he didn’t score any tries for a start – he was still slippery with four line-break assists, two try assists and five tackle breaks.

"I thought we did a pretty good job on him but he got us there a couple of times with a couple of tries down their left, our right [edge]," Bellamy said.

"I can't be too critical of them because he's a hard guy to handle."

First points in the game came via the Storm in the eighth minute, off the back of two Manly errors.

Firstly Trobojevic was stripped of the ball close to his own line in a one-on-one tackle from his NSW Origin teammate Josh Addo-Carr. Then a wayward Lachlan Croker pass gave Melbourne the scrum feed and from that set Kenny Bromwich slid over in the left corner of a greasy Suncorp Stadium track.

A Nicho Hynes penalty for a poor goal-line dropout by Daly Cherry-Evans and 8-0 was a comfortable-enough lead.

Manly spent most of the first half defending with the Storm enjoying 62% of possession.

They seemed fatigued in the shadow of half-time but against the run of play, Jason Saab intercepted a Hynes pass meant for Addo-Carr and raced 90 metres untouched. A Reuben Garrick penalty as the hooter sounded meant it was locked up 8-8 at the break.

Grant with the vision and Olam steams through to score

One interested bystander was seen on the sidelines in Penrith coach Ivan Cleary, whose Penrith side had enjoyed a win over the Roosters in the previous game.

He was just having a look at the two clubs his Panthers are likely to face at some stage in the finals.

Manly took the lead early in the second half through Garrick converting his own 43rd minute try, but Sea Eagles joy was short-lived. Justin Olam scored his 10th try of the season and scores were locked up again (14-14).

Slingshot engaged: Saab intercepts a Hynes pass and sprints away

Tit-for-tat tries through Olam  and Garrick again, and it was only a missed conversion separating them – Storm ahead 20-18.

But a Jahrome Hughes burst upfield and a Garrick error gave Munster an opportunistic try and Storm were settling in for a 17th win in succession.

"It's been one hell of an effort from this group to win 17 in a row in this competition. It's pretty remarkable," Bellamy said, reminding everyone his side was down on troops with Nelson Asofa-Solomona, Tui Kamikamica, Felisa Kaufusi and George Jennings missing.

He said Ryan Papenhuyzen twisted his left knee in a tackle but he expected him to be fit for the Raiders next weekend.

Bellamy also didn't believe the 2021 premiership race was down to a three-horse race between Storm, the Panthers and Rabbitohs.

"To me, there's five or six teams at the moment that could probably win the competition." 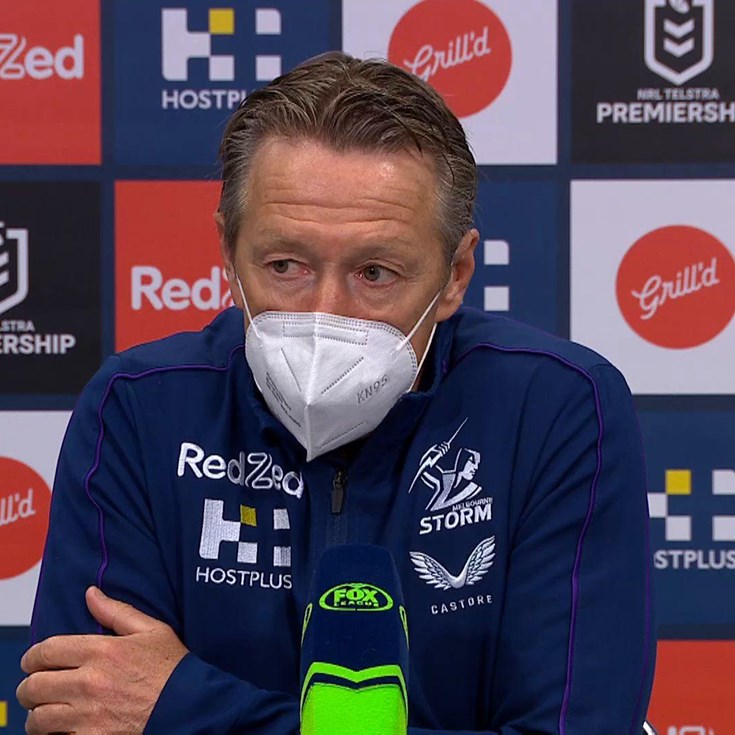