A night Wests Tigers players - and fans - will quickly want to forget ended with a 66-16 loss to a rampant Storm side at Sunshine Coast Stadium.

Melbourne scored seven tries in the first half - including an incredible five in the opening 15 minutes - en route to the biggest score a side has registered in 2021.

Wests Tigers scored three times in the final 25 minutes, but that came after an opening 55 minutes that had people scouring for the record books for all the wrong reasons as far as they were concerned.

The Storm had 10 different try-scorers, with Reimis Smith and Jahrome Hughes crossing for doubles, but, amazingly, the competition’s No.2 try-scorer Josh Addo-Carr and fellow winger George Jennings didn’t get on the scoresheet.

Wests Tigers scored three late consolation tries with a welcome chunk of possession to stop the Storm setting any records.

Hughes dances his way to a double

Queensland State of Origin forwards Christian Welch and Harry Grant started from the bench and Joe Ofahengaue had limited input, as Melbourne turned in a blistering display.

Maroons coach Paul Green will have to weigh up what to do with the trio after they had restricted involvement in the unceremonious shellacking.

Welch, who has now only played 69 minutes in the last three weeks, was expected to be the Maroons' main metre-eater in this series after a standout 2020 Origin campaign.

Ominous signs from the Storm as Hynes finishes off a beauty

While he ground out a commendable 124 metres against the Tigers, with 15 minutes left to play in the game he was visibly struggling for breath.

Similarly, Ofahengaue had just 27 minutes of game time and 34 metres with the ball in hand.

Storm coach Craig Bellamy said Welch wanted to get plenty of minutes into his legs.

"I didn’t want to start him tonight and he was happy enough with that," coach Craig Bellamy said.

“The 12 minutes he played in Origin was about the only minutes he had in a month.

"I probably wanted to get him off 10-15 minutes before the end of the game if everything went okay. It didn’t.

"I only had one player left on the bench at the end. It was an unbelievable game how it went points-wise, but I can’t remember the last time we ran out of players on our bench and had a guy in the bin.

"Christian was [struggling], but he had this idea in his head he wanted to get as much time under his belt so he can feel confident for Origin."

Interest will also surround Grant, who was Queensland’s top tackler in Game One, but only came on after 27 minutes and played just 45 minutes against the Tigers. Initial reports when he left the field in the second half were that he was rested.

The absence of a second specialist hooker was a hot topic of debate following Queensland’s 50-6 loss in Townsville.

Grant could have played even fewer minutes for the Storm, had starting rake Brandon Smith not been rested for the entire second half with a corked calf.

Smith had light strapping on his right leg but appeared in good spirits pacing the sidelines as his teammates carried on from their 40-0 halftime advantage.

Teammate Reimis Smith appeared more of a concern, grimacing in pain as he headed for the sheds with a sprained ankle after scoring a spectacular try from a George Jennings grubber in the 46th minute but coach Craig Bellamy said post-match that the injury didn't appear as serious as first feared.

It was a cakewalk for Bellamy’s men, who led 30-0 after just 17 minutes. By that stage, Wests had held the ball for just 20 seconds of play.

There were no thoughts of conservative play from the Storm. They swung the ball wide from the opening set and got a reward almost immediately when Brandon Smith crashed over.

A deluge followed, with five converted tries by the 18th minute.

Hynes ended up with a personal tally of 22 points at a ground that holds plenty of special memories for the reborn talent.

The former Sunshine Coast Falcon has only experienced defeat at the venue once in three seasons, stretching back to 2019 when his State League outfit went one game short of an undefeated regular season.

For the Storm, it has been eight wins from as many games at their adopted second home in the Sunshine State.

As much as the Tigers would have liked the contest to be called off at halftime, Melbourne may have felt likewise after losing Reimis Smith and then Tom Eisenhuth (dislocated elbow) and seeing Nelson Asofa Solomona sin-binned.

"I don’t think Reimis is quite as bad as we initially thought,” Bellamy said. "He might miss one or two games."

"Tom’s injury ... I’ve had a couple of those in my career and know how painful they are.

Luckless Shawn Blore, not long back from wrist surgery, was a second-half casualty for Wests, pausing to cry under the support of trainers as he suffered a left leg injury. 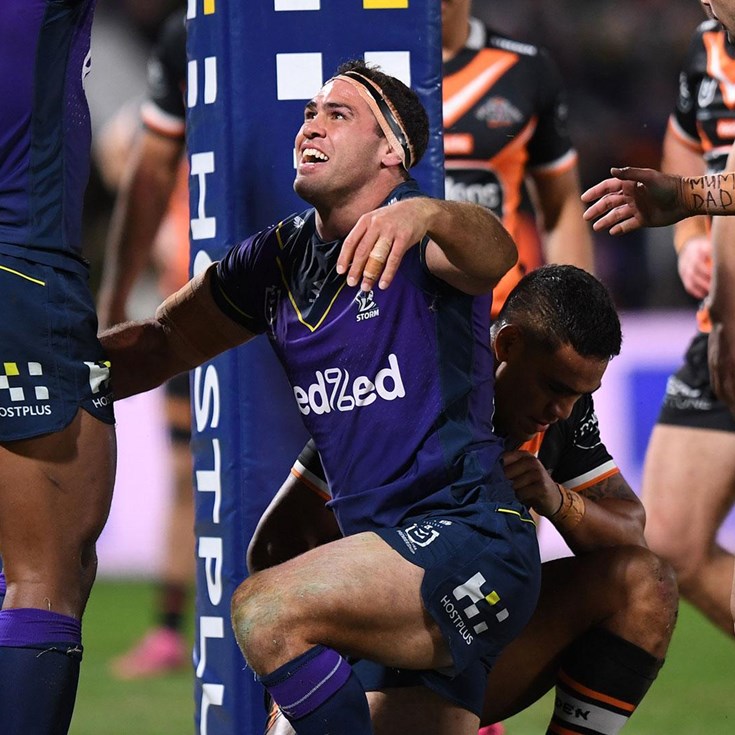