Nicho Hynes became the hottest property among off-contract NRL playmaker's with yet another starring performance as Melbourne thumped Brisbane 40-12 at Suncorp Stadium on Thursday night to kick off Indigenous Round.

With the Storm missing stars Cameron Munster, Harry Grant, Ryan Papenhuyzen and Christian Welch it has been the irresistible form of fullback understudy Hynes that has kept this Melbourne machine in full flight as they claimed their ninth straight win.

Hooker Brandon Smith bagged a double to further enhance his credentials as a starting hooker while Hynes finished with 212 running metres, one try, two try assists and three line breaks in a performance that underlined his value as the most in-form off contract playmaker in the NRL.

In the six weeks since Hynes has had a starting role the 24-year-old has produced 11 try assists and led the Storm to an averaging winning margin of 29 points.

Bellamy admitted he was surprised at the consistency of Hynes' form since grabbing his chance as a starter and said while he'd dearly love to keep him in Melbourne next year but knows as he can't guarantee him a starting spot he may leave.

"It has a little bit [surprised me]. The thing that I probably didn't see in him was the amount of involvements he has been having," Bellamy said.

"He is a talented player, he has a got a good head for the game, he has a good skillset as well, he is a skilful player without a doubt. I probably didn't see the amount of involvements that he has been having in all these games and he continues to have it week in, week out.

"Sometimes you get a guy who might be able to do it one week or two weeks in a row. He has been like that for the last six weeks and that's the thing that has probably surprised me if anything has.

"We really want to keep him without a doubt … it all depends what Nicho wants out of his footy career at this time and next year.

"I don't know the financial, we have a position in our cap where we can offer him a certain amount and whether that will be enough I'm not quite sure.

"Having said that I hope he will consider that he is playing really good footy where he is at the moment.

"At the end of the day it will be what Nicho decides is really important for him in life and also his footy life at the moment. We are as keen as mustard to hold onto him if we can."

In a tough night for the Broncos where playmaker Anthony Milford produced arguably his worst half of football and was eventually benched before full-time, prop Payne Haas left the field with a suspected medial ligament knee injury that has cast a doubt over his availability for NSW State of Origin selection.

Walters believes Haas 'in serious doubt for Origin I'

Haas has been Brisbane's best and most consistent performer this year but far too often he's been left as a lone leader and any absence for the Broncos would make the task for coach Kevin Walters to string results together even tougher.

Walters is keen to bring Hynes to Red Hill next year and he got a perfect example of what he could bring to the Broncos with a performance that only adds more value to his next deal and is set to make him the most in-demand playmaker on the market.

The Foxx gets a try in Indigenous Round

Brisbane have reportedly offered a three-year $1 million deal for Hynes, but it hardly seems enough on his current form and the Broncos won't be the only club keen to lure him away from the Storm with the offer of regular starting action either at fullback or in the halves.

"He had the wrong jersey on," Walters said.

"We will worry about that next year."

Brandon Smith at his destructive best

The Storm led 16-0 at half-time but Hynes quickly buried any hope of a Brisbane fightback as Melbourne scored twice in the first four minutes after the break.

George Jennings scored in the 42nd minute after David Mead fumbled a terrible offload by Tevita Pangai Jnr then moments later Hynes cut through the defence to put Cooper Johns across for his first NRL try and a 28-0 lead.

Hynes crossed for his own four-pointer in the 53rd minute when hooker Brandon Smith threw a sensational cut-out pass across the face of three teammates to put his fullback into space.

Bellamy said the win was set up by Melbourne's first-half defence where they repelled multiple Brisbane attacks.

"I didn't think it was that impressive to be quite honest, I thought both sides were off a bit," Bellamy said.

"We struggled to complete and didn't complete after scoring points. I was a bit disappointed in our performance because I know the Broncos didn't play that well either."

Bellamy also was strong in his praise for the entire Storm club including staff and their families who are currently entering another COVID lockdown in Melbourne with the playing group set to remain on return to the Sunshine Coast for an indefinite period of time for the second year. 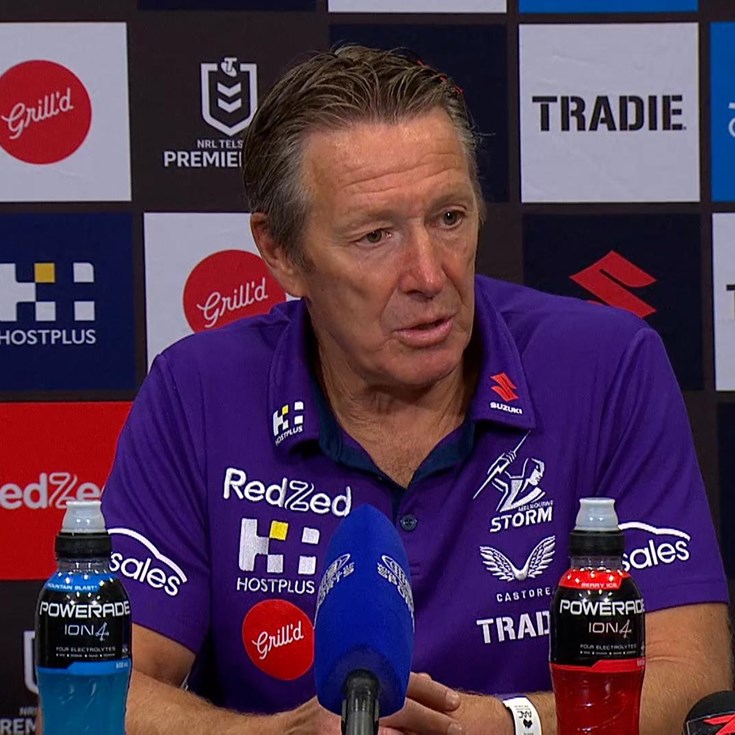 Brandon Smith at his destructive best