Canberra's reward for snapping their five-game losing streak despite playing a man down for more than half a game against the Bulldogs is a match-up with the potent Melbourne attacking machine.

The loss of Josh Papalii, Jack Wighton and Josh Hodgson to suspension multiplies the difficulty of that assignment exponentially.

Coach Ricky Stuart has said repeatedly how proud he is of the team's ability to keep on fighting but it will take more than guts and determination to counter the Storm's many weapons or breach the second-best defence in the NRL.

The possible return of Joseph Tapine, Jordan Rapana, Sia Soliola and Ryan Sutton would help Stuart plug some holes but the Raiders will also need to manufacture some luck if they are to be competitive on Saturday.

With Melbourne continuing to pour on the points despite losing key players coach Craig Bellamy is in a pretty good place. Even the blow of losing gun No.1 Ryan Papenhuyzen and back-up hooker Tyson Smoothy is balanced out by the hot form of Nicho Hynes and the return of hooker Brandon Smith.

Raiders: Ryan Sutton has been promoted to the starting side in his return from an elbow injury and Hudson Young reverts to the bench. Matthew Timoko is 18th man,

Ricky Stuart has been forced into multiple changes by the suspensions of Jack Wighton, Josh Papalii and Josh Hodgson.

Veteran playmaker Sam Williams is the new five-eighth, Dunamis Lui moves from lock to prop to cover for Papalii and NSW Cup halfback Brad Schneider has been named to make his NRL debut off the bench in place of Hodgson.

Siliva Havili and Harry Rushton were the first two players cut 24 hours before kick-off and Iosia Soliola was the last man cut an hour before kick-off.

Joe Tapine (knee) and Jordan Rapana (hamstring) are at least another week away from selection.

Captain Jarrod Croker has recovered from a shoulder injury but will remain out indefinitely as he receives treatment for a knee issue.

The Raiders have lost their past three games at GIO Stadium and have won only three of their past 18 games at the venue against the Storm.

Storm: A late change an hour before kick-off with Aaron Booth coming on to the bench for his NRL debut and Aaron Pene dropping back to 18th man. Dean Ieremia was the last man cut from the squad.

Jahrome Hughes (calf) and Kenny Bromwich (hamstring) came out of the side on Friday with Cooper Johns to slot in at halfback and Tom Eisenhuth moving into the back row. Trent Loiero is the new face on the bench.

Brandon Smith's suspension expired at just the right time with Tyson Smoothy sidelined by a knee injury, the Kiwi coming straight back in at dummy-half.

The Storm have scored 40 points or more in six of their past seven games while winger Josh Addo-Carr has scored nine tries in his past two games.

Tom Starling v Brandon Smith: Canberra's speedy and skilful rising star, who has surpassed English veteran Josh Hodgson as Canberra's No.1 dummy-half, presents a sharp study in contrasts with the player they call the Hectic Cheese.

His game is built on speed and skill whereas his more experienced Kiwi rival is all about physicality and a full-speed-ahead philosophy.

Melbourne's top-rated attack, No.1 for both points and tries, opens up opposing defences at almost double the rate of Canberra. The Storm rank No.1 for line breaks with 74 while the Raiders are a distance ninth in that category on 44. 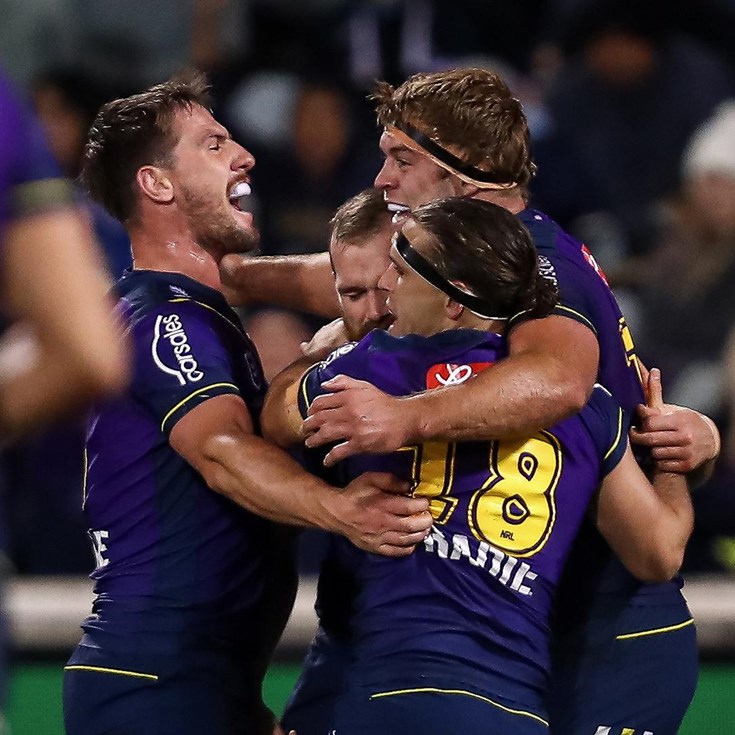 Raiders v Storm: Sutton back ahead of schedule; Hughes, Bromwich out