Melbourne coach Craig Bellamy believes Ryan Papenhuyzen is closing the gap on Rooster James Tedesco as the game's best fullback after the Storm No.1 scored four tries in the space of 11 minutes in a 40-6 win over the Broncos on Friday night.

After the Broncos scored first through Xavier Coates it was Papenhuyzen who turned the game on its head with tries in the 26th, 30th, 34th and 37th minutes.

Papenhuyzen ran for an incredible 183 metres in the first half and had seven tackle breaks as he equalled the Storm's club record of four tries in a match held by Matt Geyer (twice), Aaron Moule, Jake Webster, Billy Slater, Sisa Waqa and Suliasi Vunivalu.

He finished the night with 292 metres, 10 tackle breaks and 26 points, the second most by a Storm player in a match after Geyer's 34 points (four tries and nine conversions) against Wests in 1999.

"James Tedesco is the best fullback in the game and has been for the last couple of years... but Paps is getting closer to him," Bellamy said.

"We wouldn’t swap Paps for anyone."

Bellamy paid tribute to the role that former star fullback Slater has played in Papenhuyzen's stunning rise during the past 18 months.

"No one has been more important in Paps’ development than Billy Slater," Bellamy noted.

Papenhuyzen's night out with four tries in 11 minutes

"Paps wouldn’t be where he is today if it wasn’t for Billy Slater."

Perhaps the standout of Papenhuyzen's haul was his third try, with giant Kiwi prop Nelson Asofa-Solomona dishing off a trademark offload that Papenhuyzen collected, pinned his ears back to attack the line and carry two Brisbane defenders over to score.

Asofa-Solomona also played a key role in the fullback's fourth, slipping another quality offload to Brandon Smith who found Jahrome Hughes who burst into the backfield and found Papenhuyzen looming up in support.

Papenhuyzen's streak was finally broken by George Jennings in the 59th minute after Brisbane allowed a bomb to bounce and Tom Eisenhuth picked up the scraps and found the winger who dived over.

Jennings had a second shortly after and fittingly it was Papenhuyzen throwing the final pass after superb lead-up which featured debutant Trent Loiero.

Jennings scores after the Broncos leave the bomb to bounce

At 32-6 the game was well and truly in the bag but Papenhuyzen had one more trick up his sleeve, producing a magical flick pass out the back to Cameron Munster who put the ball on the toe and touched down for 38-6.

Playing in his 100th game for the Storm it was Josh Addo-Carr who was handed the kicking duties and he popped over the conversion to make it 40-6.

Remarkably it was Brisbane who looked the better side early thanks to Anthony Milford's kicking game and Coates' superb 85-metre effort in which he outpaced Addo-Carr.

That would turn out to be a rare highlight for the Broncos as they were monstered up front by Christian Welch (17 runs for 179 metres), Tui Kamikamica (16 runs, 139 metres) and Asofa-Solomona (14 runs, 122 metres) and exposed out wide by Papenhuyzen, Olam and Jennings.

Having steadied the ship after consecutive losses to the Eels and Panthers, the defending premiers head into a round five clash with the winless Bulldogs in ominous form.

For Brisbane it's back to the drawing board as they prepare to square off against a rampant Rabbitohs outfit to open round five on Thursday. 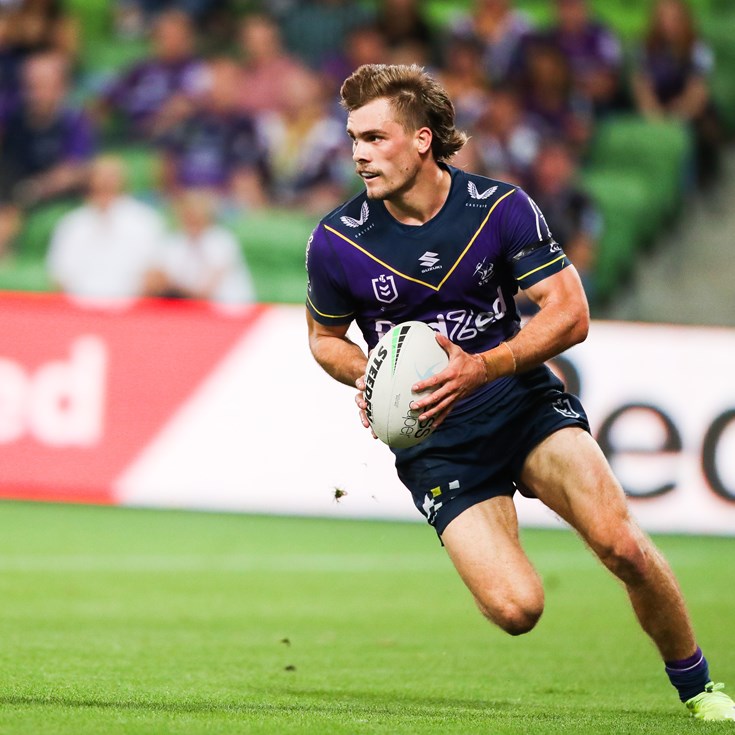