Kurt Capewell snatched the win for Penrith, then fellow second-rower Viliame Kikau saved it with an equally amazing play.

A minute after Capewell scored the match-winning try, Kikau ensured it was not in vain by denying Justin Olam a four-pointer after the siren with a desperation tackle, which prevented the Storm centre from grounding the ball in the BlueBet Stadium in-goal area.

Penrith coach Ivan Cleary was at a loss to explain the desperation of the try-saving tackle on the last play of the game, with Kikau dragging himself off the deck and combining with Spencer Leniu, Matt Burton and Tyrone May to hold Olam up over the line and ensure the grand final rematch ended with the opposite result to last November’s heart-breaker.

"I don't know how to describe that. I suppose sometimes the pain of losing drives you to do things you wouldn't normally do," Cleary said.

"You're naturally going to be motivated for this game. We didn't hit the front until the 79th minute. You don't want to throw that away after all that time.

"I'm just very grateful to come away with the two points tonight ... They showed a lot of courage in many ways but I suppose the last play of the game summed that up."

Penrith had looked dead and buried at 10-6 down with just over two minutes to play before regaining the ball from a left-side shift then spreading right for Capewell to beat three defenders and plant down.

Stephen Crichton, who had nailed one conversion from touch then shanked a much easier penalty goal, iced the conversion to send the home crowd into raptures.

The Storm then took a short kick-off that appeared to be knocked forward by Crichton then knocked on by an offside Mitch Kenny. Penrith challenged the knock-on ruling against Kenny but Storm coach Craig Bellamy was livid at the lack of an offside penalty, with the original knock-on affirmed by the Bunker.

Melbourne had the chance to clinch the win regardless when Olam took on the defence in the final play of the game, but a miraculous try-saver from Kikau denied the visitors the result.

It was a valiant win by Penrith to move to 3-0 atop the Telstra Premiership ladder while the Storm have now lost successive Thursday night epics in western Sydney.

Already without Nathan Cleary (head knock) and Api Koroisau (broken wrist), the Panthers lost Dylan Edwards at the end of the first half to a suspected broken hand after the fullback was arguably the best player on the ground in a 6-6 opening half.

Cleary's replacement Matt Burton proved yet again he is far too good for reserve grade, kicking almost 600 metres in a fine all-round performance with his long kicks to space a huge factor in keeping Penrith in the contest.

Cleary also paid credit to Burton’s performance filling in for Nathan Cleary, with plenty of media attention swirling around his 2022 move to Belmore.

"It's a huge game for a kid to come into considering the amount of publicity that's been around him," Cleary said.

"I thought he handled himself very well. He'll learn a lot out of that game."

Cleary said the nature of Edwards’s injury wasn’t yet certain but it was likely the fullback would miss some game time with a suspected broken hand.

It is likely Tyrone May would retain the utility role with Crichton, Charlie Staines or Paul Momirovski filling in at the back, but Cleary would not comment on which option was more likely.

"Hopefully it's not too bad in terms of how long he's out for," Cleary said.

"We'll have to find someone else. There's a few options there, we'll put our heads together and try and come up with something."

A one-on-one steal from Tom Eisenhuth on Brian To'o as Penrith looked to work it off their own line led to first points, with Brandon Smith catching out Capewell and Edwards from dummy-half in the 11th minute.

Penrith crossed with a lovely piece of play from Edwards helping set up Charlie Staines for his first of the year.

Olam crashed through Penrith's right edge shortly before half-time but was denied what would have been a certain four-pointer by Kenny Bromwich, who messed up his lead run and knocked Edwards out of the way for a clear obstruction to leave the scores level at the break.

A fumble from Tyrone May from a cross-field bomb, under huge pressure, gave the Storm the opportunity to finally break the deadlock in the 64th minute.

They created a numbers advantage on the left from the scrum with Munster and Hynes combining to send Josh Addo-Carr over in the corner. Munster missed the sideline conversion which later proved crucial.

The Storm held that lead until Capewell's 78th-minute try and the controversial grandstand finish that confirmed a Penrith win. 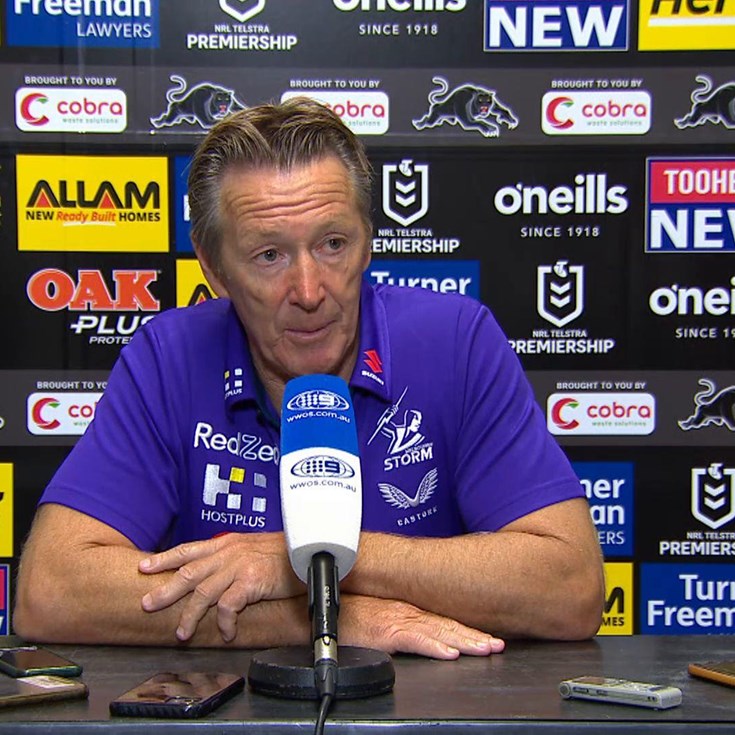 Cheese hits and spins his way to the opener

Panthers v Storm: Cleary ruled out; Eisenhuth in for Kufusi