Premiers Melbourne Storm take on title challengers South Sydney in the marquee clash of the 2021 season's opening round at AAMI Park.

Both sides have picked up where they left off, cruising to big wins in the abbreviated trial season with the Storm dismissing the Knights 30-10 and last season's preliminary finalists Souths routing the Dragons 48-16.

Melbourne will start the season without both Cameron Smith and Harry Grant but have an able substitute on Brandon Smith while the Rabbitohs look well-placed to send legendary coach Wayne Bennett out on a high.

The Storm will be keen to get off to a winning start as their opening three-match gauntlet of Souths, Parramatta and Penrith is a challenging one.

Storm: Bench hooker Tyson Smoothy is a late inclusion, replacing Nicho Hynes on the interchange, and is set to give Brandon Smith a breather at dummy-half. Darryn Schonig also dropped out of the squad an hour before kick-off, after Cooper Johns and Trent Loiero were the first two players omitted from the squad on Wednesday.

Smoothy played at last year's NRL Nines with Penrith before linking with first the Sunshine Coast and then the Storm this summer on a train-and-trial deal.

Nelson Asofa-Solomona has been named at lock to cover for Dale Finucane, who faces six weeks out with a calf injury. Brenko Lee (hamstring) is out after only getting through limited training on Monday and his place in the centres is filled by former Bulldog Reimis Smith.

Nicho Hynes is the current utility named in Melbourne's 17 but may yet make way for Smoothy to offer cover for Smith.

George Jennings will take the wing spot vacated by Suliasi Vunivalu's move to rugby. The Storm have won nine of their past 10 games against the Rabbitohs.

Rabbitohs: The Rabbitohs are 1-17. Winger Alex Johnston came through the Bunnies' captain's run unscathed after failing to finish training on Monday and is good to go.

Apart from Liam Knight, who suffered a concussion during a training scrimmage leading into the Charity Shield, coach Wayne Bennett had pretty much a full roster to choose from.

Recruits Josh Mansour and Jacob Host have been named to start in their club debuts while Jai Arrow and Benji Marshall will come off the bench.

Bench forward Hame Sele is out for a fortnight with a rib injury, centre Braidon Burns (knee) and Brock Gardner (Achilles) are sidelined indefinitely. The Rabbitohs face Melbourne without Cameron Smith for the first time in 17 years.

Patrick Mago and Jaxson Paulo were the final players trimmed from the reserves on game day after Tautau Moga and Troy Dargan were cut from the extended squad 24 hours before kick-off.

Ryan Papenhuyzen v Latrell Mitchell: The Storm No.1 is poised to take his game to another level after a breakout 2020 season. Papenhuyzen has added goal-kicking to his repertoire and will be looking to take on more responsibility with the departure of Cameron Smith.

Meanwhile, Mitchell showed with a standout Charity Shield performance that he is well and truly settled at fullback after a 2020 plagued by adjustment issues and injury. Both benefit from plying their trade in stacked attacks.

When combined with red-hot five-eighth Cody Walker (Charity Shield hat-trick) and Latrell Mitchell, who is looking increasingly comfortable in the No.1 jersey, the Rabbitohs could be point-scoring monsters in 2021.

What will be the result in this Telstra Premiership clash? 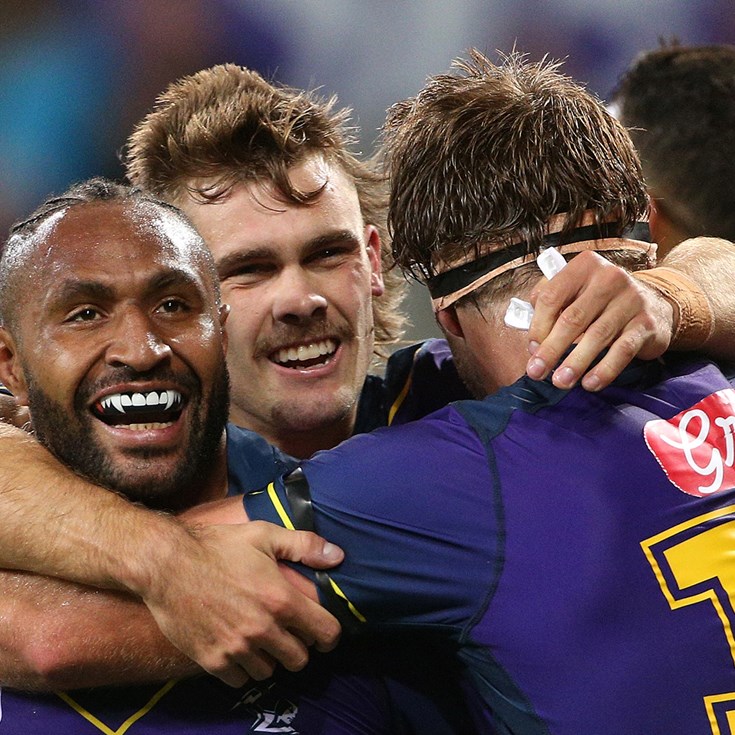 Papenhuyzen turns it inside to Olam