The Storm became the first team through to the NRL season decider after a Jahrome Hughes masterclass inspired a 30-10 preliminary final win over the Raiders at Suncorp Stadium.

The Storm are into the grand final for the fourth time in five years while their skipper Cameron Smith will make his eighth appearance in a decider.

Smith left the field in the 75th minute and waved to the crowd after playing a key role in getting his side to the big dance yet again.

He was then chaired from the field by his teammates and lapped up every moment of what seemed certain was his last game at Suncorp Stadium.

The man himself was not letting on after the game though.

"I can't tell you. I don't know," Smith said when asked if the grand final would be his last match.

"All I'm worried about this year is trying to play well and just enjoy watching these young fellas grow as footballers and grow as men.

"I've been very fortunate in my career to be involved in some really big games with the Storm and lucky enough to win some premierships along the way.

"There's a lot of guys starting out their career that haven't had that opportunity yet and I'm just enjoying their success at the moment and sharing their journey. I haven't thought past that."

Smith said it was Bellamy who "pulled me up" into the arms of teammates after the game when he was getting photos taken with fans, a gesture Bellamy explained.

"I just think it would be a nice photo if he does decide in January to pull the pin or wherever," Bellamy said.

"Again, I just thought it was the right thing to do in case it is his last game at Suncorp. He's had obviously a lot of wonderful memories here.

"I reckon he's earned the right to decide when that's going to happen. We, as a club, have sort of planned if he goes next year. But if he doesn't, it's the same. We'll work in with that.

"At the end of the day, I'm not going annoy him, I'm not going to waste my energy thinking about it because he'd probably just do the opposite that I thought anyway just to piss me off.

"I'll let him make that decision whenever he feels free."​

There was a failure of the stadium’s ticketing system due to a national outage with thousands of the 37,112 fans having to wait up to eight minutes into the half to get in, but there was no failure of the Storm’s systems.

If one moment summed up Melbourne’s resolve it was a 67th-minute tackle by 37-year-old skipper Smith on Raiders winger Nick Cotric one metre from the tryline after a kick through.

It was the stuff champions are made of, and Smith and his team are definitely a champion outfit.

The Storm's achievement to progress to another grand final is remarkable given they lost Cooper Cronk to the Roosters at the end of 2017 and Billy Slater to retirement at the conclusion of the 2018 season.

The two men who have filled their illustrious shoes in the 2020 season – Hughes and Papenhuyzen – were outstanding in the preliminary final as they have been for the entire season.

One of the duo had a key hand in all of  the Storm’s opening four tries as Craig Bellamy’s men started the game on fire.

Halfback Hughes stood up to play his best game of the season when his team needed him most with his kicking, passing and running game on song.

The Storm hammered away at the Raiders right edge early, as expected, and Josh Addo-Carr poked his nose through. Hughes then found a storming Jesse Bromwich with a slick ball and Melbourne led 6-0.

Cameron Munster, Papenhuyzen and Kenny Bromwich combined to put Addo-Carr away and the fullback backed up on the inside to score a cracker from a sweeping 60-metre movement.

Felise Kaufusi scooped it up for Hughes to dash through a staggered defensive line and find Suliasi Vunivalu.

The Storm right-winger then dazzled on his feet to beat Jarrod Croker and a hapless Valemei to make it 16-nil after nine minutes.

Papenhuyzen’s creativity came to the fore with a testing grubber which was fumbled and bumbled by Cotric and snaffled by an airborne Justin Olam. At 24-0 after as many minutes it was verging on game over.

Canberra had other ideas and mounted a resurgence and dominated for the rest of the half but still trailed 24-6 at the break.

Centre Brenko Lee was put on report for a careless high tackle on Valemei after play resumed.

For Smith, winning next week's grand final would be fitting after tasting victory in one of their last three but regardless, he said the achievements of the club over the last 10 years were special.

"There's no doubt it'd be nice to win. That's the reason we play the game, is to go out and win a premiership," he said.

"But we've been talking over the last couple of weeks and just reflecting on what our organisation has been able to do over the last decade. Tonight was our eighth prelim in 10 years. It's a pretty special effort.

"How many grand finals is that [in the last ten years]?  It's five. We've been in every second grand final for the last 10 years. So some people will judge success off winning a grand final. I'm just really proud of the way this footy side and this organisation seems to front up every year." 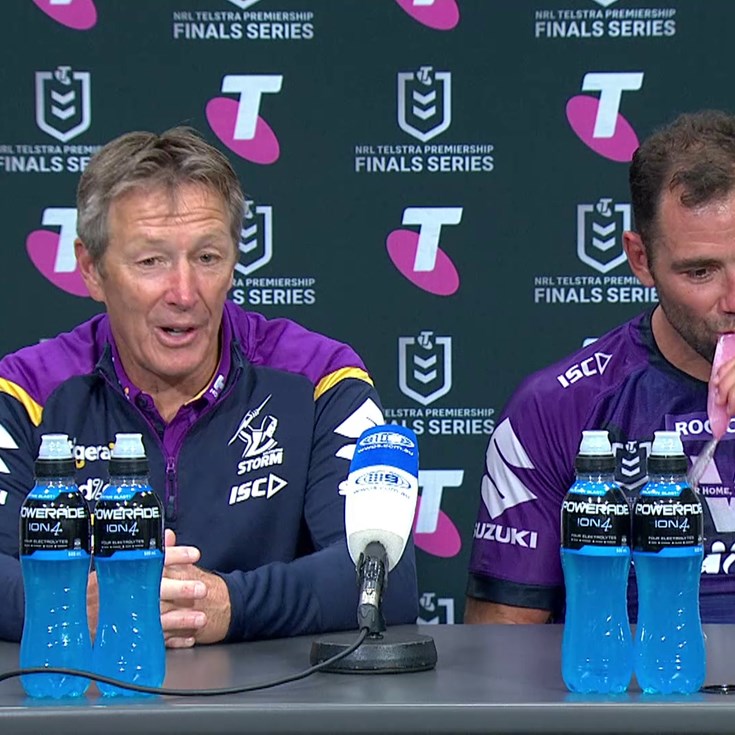 Slater reflects on what could be Smith's farewell