Storm coach Craig Bellamy said he was proud of his team's effort to secure second place on the ladder in a difficult time away from their home base in Melbourne in 2020.

The thumping 50-22 win over Wests Tigers at Sunshine Coast Stadium on Saturday night ensured Melbourne would finish top-two for the fifth consecutive season.

"One and two get the first home game and get a second chance. We don’t get the shield like Penrith have and what they have done to win the [JJ Giltinan] Shield with 14 games in a row is remarkable," Bellamy said.

“It is a really good result for us and I am really proud of the club the last five years. This year has gone to another level, living away from home and a lot of things people wouldn’t know about that have been quite challenging and difficult.

"We are probably in a pretty honoured position considering what the people of Melbourne are going through and we have always been aware of that."

Despite the scoreline Bellamy was clearly unhappy with the defence at times and also saved a special spray for his captain Cameron Smith when he flipped him the bird, albeit in jest, after Smith scored his 47th career try in the second half to go past Bellamy’s career mark of 46.

Bellamy apologised to anyone that took offence at his gesture before addressing Smith’s milestone moment.

“That was a scrappy old try, and I dead set thought he knocked it on,” Bellamy grinned.

The Storm do have plenty of improvement in them before the first week of the finals.

“I thought our defence was pretty ordinary on a few occasions and I thought our second half was all over the place which was a bit disappointing,” he said.

“Having said that we had a few injuries in the second half and a few guys playing out of position, a couple of guys who stayed out there while still injured, so that might be a bit of an excuse.

“Our attack has been going really well… but there are a couple of things with our defence [before the finals] that we will need to look at.”

Nelson Asofa-Solomona was at his imposing best and Melbourne also received a finals boost with Brandon Smith returning from a broken jaw off the bench.

The points flowed right from the kick-off as Melbourne sent a finals warning to the rest of the competition about the array of attacking weapons in their arsenal.

The first Storm try came on the back of an immaculate low 40-metre kick by Hughes for Vunivalu to race onto and score with ease in the fifth minute.

The second Storm try was another example of top shelf execution on the last tackle. Instead of kicking, the ball went through the hands and fullback Hynes timed his pass to Kenny Bromwich to perfection, with Addo-Carr finishing the slickest of movements.

The brute force of Tino Fa’asuamaleaui at full throttle sent Sam McIntyre and Matt Eisenhuth off for HIAs in the 14th minute after they were skittled like nine-pins.

Two minutes later the width and precision of a Harry Grant pass from dummy half gave Josh Reynolds and Benji Marshall the room to combine and send Asu Kepaoa over with the rookie winger finishing in acrobatic fashion.

Vunivalu leaps his way to two

Kenny Bromwich showed his mastery of the short-side play with a neat ball to Hynes who bamboozled the Tigers defence to score and take the Storm to a 16-4 lead.

The Tigers refused to buckle and Josh Aloiai brushed Bromwich aside off a Grant pass to reduce the Storm’s lead to just six points.

A big moment in the half came when Cameron Munster and Justin Olam threw Joey Leilua over the sideline with contempt.

Moments later another pinpoint Hughes kick, only this time via the aerial route, was snaffled by a leaping Vunivalu and the Storm led 22-10.

The half finished with Luke Garner in the sin bin for a professional foul and the Storm in control with a 32-10 lead.

Vunivalu went off early in the second half with a tight hamstring and was followed soon afterwards by Kenny Bromwich with an HIA.

The Grant, Reynolds and Marshall combination put Kepaoa over for his second as the Tigers played with freedom.

Adam Douehi sliced through soon afterwards to reduce the margin to 10 and the Tigers had a sniff.

Aloiai left the field with what appeared to be a serious knee injury as the Storm clicked into gear again with Olam finishing a movement that went from one side of the field to the other.

Skipper Smith then scored his 47th career try, to go past Bellamy, in a comical episode. Luciano Leilua interfered in the play the ball and Smith toed the ball ahead and regathered to score.

Fa’asuamaleaui finished the scoring after a deft Cameron Smith kick to wrap up a 50-22 victory.

Wests Tigers coach Michael Maguire said his side fought back well after shooting themselves in the foot in the second half.

He said there was a lot to play for next week with the club farewelling club legends Benji Marshall and Chris Lawrence.

"It is a really important week for Chris Lawrence, Benji and a number of boys that will leave us," Maguire said.

"It is a really important game for us to make sure we send everyone that is leaving off in the right manner.

"If we go out and put pressure on Parramatta we know what we are capable of doing, so we have got to go out and do that." 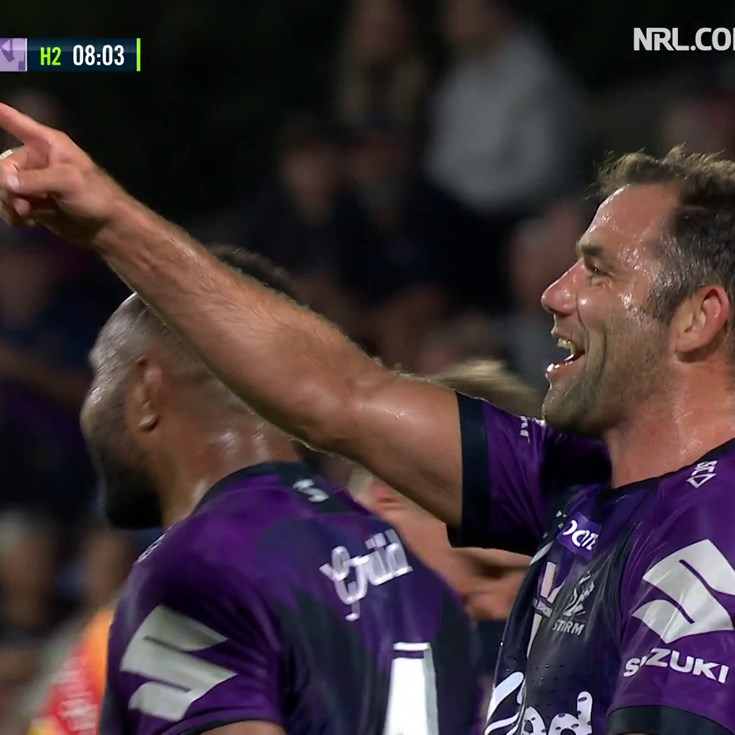 Vision from Hughes, pace from Vunivalu