The Newcastle Knights are a top-eight team for the first time in a long time, but have they got what it takes to stop the Storm?

Melbourne have dominated this match-up traditionally and in the past five years in particular; the Knights haven't beaten the Storm since 2015. Last year it was a 34-4 demolition at AAMI Park and in June Melbourne prevailed 26-12 in Newcastle's makeshift home of Central Coast Stadium.

And there's no sign things will get much easier for the men in red and blue this week. Melbourne are in red-hot form – since losing to league leaders Penrith in round six they've reeled off five straight wins, including victories over both last year's grand finalists and three games in which they've scored more than 40 points.

Last week they recovered from a poor first half to pile on 46 against Brisbane.

But the Knights have reason to be quietly confident themselves. Their defence is looking much improved this season – conceding more than 20 points just twice since the season resumed in round two (including that loss to Melbourne).

Attacking weapons Kalyn Ponga and Bradman Best both found form in recent weeks after a lean few rounds. And coach Adam O'Brien knows the Storm back to front after spending 11 years as an assistant coach at the club.

Storm: Prop Jesse Bromwich (No.21) is a confirmed starter for the Storm after overcoming an MCL injury. He will start the match, with Nelson Asofa-Solomona dropping back to the bench. In the other late change, centre Justin Olam is out, with Tom Eisenhuth named to start in the centres. Olam and Darryn Schonig were the last two players dropped from the squad.

Marion Seve replaces Brenko Lee (broken hand) at centre. Tom Eisenhuth returns from a hamstring injury on the bench in place of Paul Momirovski (finger). Albert Vete and Ryley Jacks were omitted from the extended bench 24 hours before kick-off.

Knights: The Knights will start 1-17 after Tex Hoy and Jirah Momisea were the two players left out an hour before kick-off. Chris Randall comes in at hooker for his second NRL game following season-ending injuries to Andrew McCullough and Connor Watson. Sione Mata'utia (syndesmosis) is also out with Aidan Guerra starting in the back row.

Phoenix Crossland and Josh King join the interchange. Mason Lino and Matt Croker dropped off the reserves on Saturday. Only seven Knights players have achieved an NRL victory over the Storm.

Ryan Papenhuyzen v Kalyn Ponga. Two of the most electrifying fullbacks in rugby league go head-to-head this week, with Papenhuyzen fresh from a second-half bonanza against Brisbane and Ponga the man Newcastle will rely on if they are to keep it close against Melbourne.

This pair are renowned for their speed and footwork but are also under-rated playmakers. If Ponga has an off game it's hard to see the Knights winning; if Papenhuyzen has a big one it's hard to see Melbourne losing.

Melbourne skipper Cameron Smith hit the top of the goal-kicking leaderboard for 2020 at the end of last week's win over Brisbane and also brought up 2700 career points, the first player ever to reach that milestone. 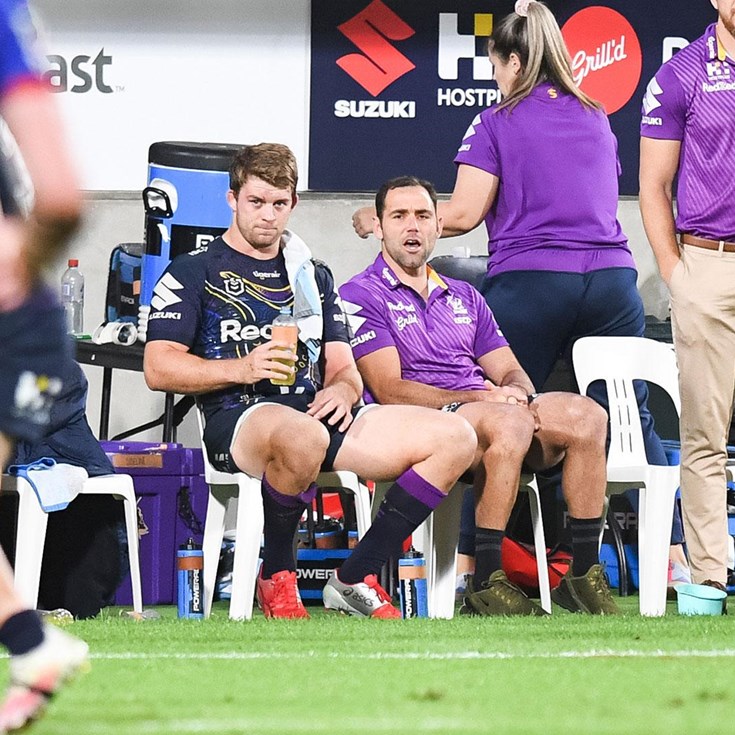 Cam Smith is off the nudie

Addo-Carr: Why it's a special week for our people