The Storm blew the Broncos off the park in the second half to win 46-8 as explosive fullback Ryan Papenhuyzen and evergreen captain Cameron Smith lit up Suncorp Stadium with a performance of sheer class.

The Storm, now the competition leaders, have not lost to the Broncos since 2009 and retained their dominance over their rugby league “bunnies”.

The Broncos went in as rank outsiders but dug deeper than they have for several weeks to go to the break down by just six points.

The Storm made uncharacteristic errors to give Brisbane a sniff and unlike the previous week against Wests Tigers they played as a much more cohesive unit initially.

A Smith grubber kick and smart toe ahead by Kenny Bromwich set up the first try for Josh Addo-Carr in the second minute after an Anthony Milford fumble.

Instead of dropping their heads, the Broncos rallied.

New half Tom Dearden made an immediate impression with his scheming and organisation on the left and Milford added spark as he chimed in from the back.

The Broncos put on as slick a backline move as they had in the past eight games when Dearden, Tevita Pangai, Milford and Darius Boyd all combined to put Herbie Farmworth on his way to the tryline but the Bunker ruled the English-born winger had put his foot into touch.

Cory Paix put a huge hit on Nelson Asofa-Solomona to jar the ball free and the Broncos started the game with intent.

When the Broncos went left again it was the Dearden, Milford and Boyd combination that provided Farnworth with another chance, which he took.

At 6-all in the 14th minute the Broncos were right in it.

Kotoni Staggs and Smith traded penalty goals before a communication breakdown between Tyson Gamble and back-rower Jamil Hopoate left a whole for Jahrome Hughes to step his way through and score under the sticks to give Melbourne a 14-8 lead at half-time.

The second half started with another Storm error but Croft gifted Melbourne with possession while on the attack with an errant pass and Kenny Bromwich made them pay at the other end on the scoreboard when the Broncos defence went back to round 10 mode.

Boom Storm prop Tino Fa’asuamaleaui ran over the top of Ben Te’o to score under the sticks.

Cameron Munster stood like a colossus to offload while being manhandled by two Broncos defenders. Papenhuyzen, who ran for 274 metres, was on hand to explode into space and wrangle his way over.

Hughes put Papenhuyzen away with a cracking pass and the Storm fullback, off balance, threw a spiralling pass right to left on Hughes’ chest for a pearler of a try.

Smith then kicked a 40/20 and Pangai kicked the ball away to earn himself 10 minutes in the sin bin. Addo-Carr was soon in for his 10th try in nine games against the Broncos.

Smith was on fire for Melbourne and orchestrated the second-half carve up. He swooped on a loose ball to put Fa’asuamaleaui away for a second and the conversion took the skipper to 2700 career points.

The Broncos played well for 30 minutes but had no answers when the Storm put their foot on the throat.

Storm coach Craig Bellamy said  he was "really disappointed" with the first half and that  some complacency probably crept in after the early try.

"Then we really found it hard to get back into the game to be quite honest because the Broncos played with more energy and out-enthused us and really got in to us," he said.

"You’ve got to give the Broncos some credit. They tried really hard in the second half but couldn’t control the ball or their field position. 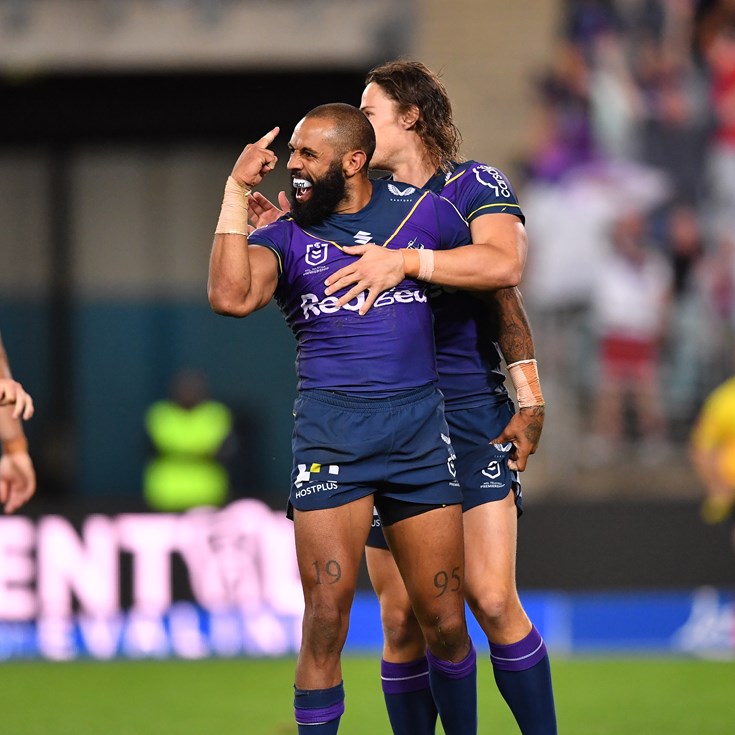