Cameron Munster celebrated his return from injury in style to inspire the Storm's 42-6 win over an error-riddled Titans outfit on the Sunshine Coast.

Munster, returning a fortnight earlier than expected from a grade two medial tear suffered in round seven against the Warriors, showcased all the skills in his kit bag.

He scored a try, set up another with what can only be described as a double-pump floating cutout pass to hit a flying Josh Addo-Carr on the chest and was a real handful each time he took the line on.

Cameron Smith’s passing game was of the blue-chip variety and wrecking ball prop Nelson Asofa-Solomona was often unstoppable for Melbourne as he bagged the first double of his career.

Munster got himself into the game early with a slick grubber from the Storm playmaker almost providing a try for Jahrome Hughes.

The Titans had the best early chance when Jamal Fogarty dropped the ball over the line after a superbly weighted grubber by Ash Taylor.

The Storm made them pay with a flat pass from captain Cameron Smith finding Munster on the charge to score under the sticks in the 20th minute.

The Titans let themselves down with their handling but defended with vigour, with none better than a trysaver by Phillip Sami on a rampaging Kenny Bromwich.

Taylor’s short kicking game was on song and another perfectly placed grubber was snaffled by Brian Kelly for a try after the Bunker ruled on whether Kelly had pushed Paul Momirovski off the ball.

At 6-all in the 26th minute the Titans were right in it.

Another handling error cost the Gold Coast and from the scrum Munster deceived the Titans to send Addo-Carr on his way. Smith converted from the sideline and the Storm looked ominous with a 12-6 lead.

Another Titans handling error, and another Storm try followed. Asofa-Solomona was too powerful near the line and crashed over from a typical inch-perfect pass from Smith to give Melbourne an 18-6 lead at the break.

The giant Kiwi prop was at it again straight after the break to rumble his way over off a Cam Smith pass.

Smith’s passing game was of the stellar variety and another long raking pass to Hughes was distributed with style to former Titan centre Brenko Lee to score wide out.

Brandon Smith scored from dummy-half to make it 36-6 and the Storm were coasting. Addo-Carr streaked away to add to the Gold Coast’s pain.

It was not the most polished performance by Melbourne by a long shot but there were some superb individual performances by Munster, Cam Smith and Asofa-Solomona.

Titans-bound prop Tino Fa’asuamaleaui was also impressive off the bench. For the Titans only Taylor’s short kicking game was a highlight on a night to forget for Justin Holbrook’s men.

For Storm coach Craig Bellamy it was a pleasure to watch Munster resume normal service in his first game back.

"That was a great pass that he threw over the top [to Addo-Carr] after the Titans tried to defend up and in a bit on that side. To put it on the mark like he did shows a lot of skill, and  to score that try," Bellamy said.

"We pounded the line there for a while with our big fellas but couldn’t get over, but then all of a sudden he gets over. It is great to have him back and hopefully he can help us build on our performances from here in." 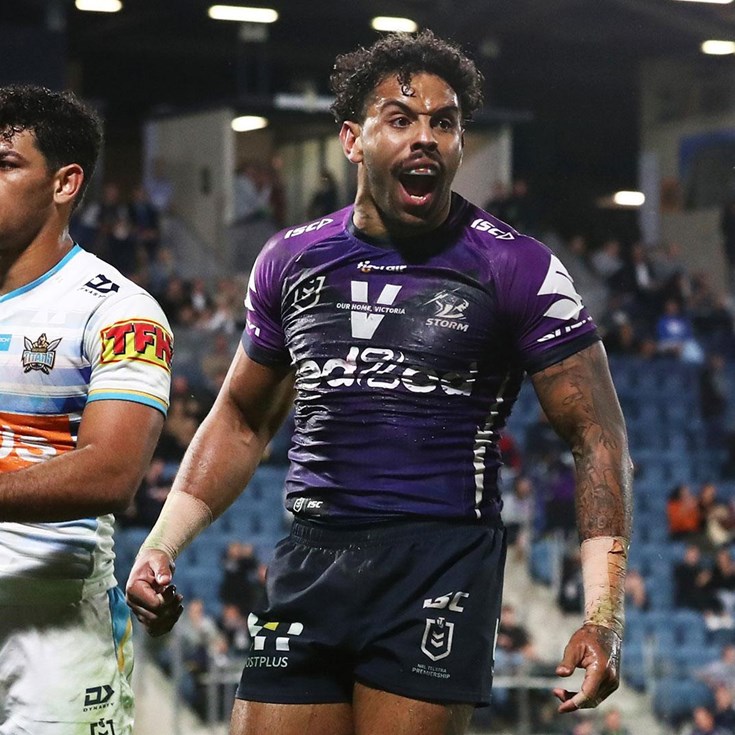 The flying Foxx adds another try