The Melbourne Storm have produced a stunning comeback to down the Roosters 27-25 in a golden point epic at Suncorp Stadium on Thursday night.

If there is to be a better game of NRL football this year then it will need to be one of the games of the century.

You couldn't have scripted the final minute of regular time. With the scores locked at 24-all, Rooster Luke Keary landed a field goal from 35 metres out with 40-odd seconds to go.

The Storm got the ball back and Ryan Papenhuyzen levelled it up with a cool as a cucumber shot of his own from the same distance.

Extra-time went the Storm's way and when Dale Finucane charged inside the Tricolours' 20 metres, Roosters hooker Jake Friend pushed him over as he went to play the ball.

Cameron Smith stepped up, as he did all night, to ice the win.

The Storm scored two tries in the final 10 minutes through Jahrome Hughes and Paul Momirovski to take a 24-22 lead before Kyle Flanagan, with ice in his veins, landed a 79th minute penalty from wide out to level the scores.

The game took so many twists and turns in the final stages that it was easy to forget that the Roosters had a 22-12 lead with nine minutes left on the clock when Josh Morris crossed.

Re-live the final minutes of the Storm-Roosters thriller

Cameron Smith started the game in the halves for the first time since round 13 of 2014 and was on song at first receiver, with Channel Nine's Andrew Johns waxing lyrical about how he still made all the right decisions.

With Cameron Munster out injured, Smith injected himself into the play with style and the Storm attack posed plenty of questions for the 2018-19 champions.

As has been the case in several titanic battles between the two clubs in recent years, Trent Robinson's men had the answers defensively.

The nous and competitiveness of Brett Morris was on show for the Roosters' first try with the veteran swooping on a pass from Papenhuyzen to Justin Olam which went to ground as the Storm attacked from their own end.

Not satisfied with just that, Morris wrangled with a couple of Storm defenders to offload to an alert Flanagan to score under the sticks.

Minutes later Olam crunched Flanagan in a belter. The ball popped loose and Josh Addo-Carr was the beneficiary. It was shut the gate and 6-all.

The Storm peppered the Roosters line but the defending premiers repelled them. Melbourne's defensive intent was ferocious with Brandon Smith pulverising Lindsay Collins with one notable bellringer to jolt the ball free.

Even the great ones get nervous

The Roosters' try on the cusp of half-time was a telling blow and this time it was Josh Morris who showed his class.

As Daniel Tupou prepared to catch a cross-field Keary kick, Morris pinned his ears back to wrap around his winger.

He showed great strength and balance to shrug off Suliasi Vunivalu and score in the corner, his 140th try in the NRL.

The Storm had thrown everything at the Roosters by half-time but the Tricolours had missed just 10 tackles out of 200 to showcase true grit.

What a game. Papenhuyzen sends us to golden point

Brandon Smith came out immediately after the break determined to do more damage defensively and he hassled the life out of Boyd Cordner, whose off-balance offload found Melbourne's Tom Eisenhuth.

Jahrome Hughes loomed up in support and streaked away to score under the sticks.

The Roosters, as has been their want in big games in the past six weeks, hit back in style.

A sweeping left to right movement ended with Angus Crichton throwing a cracking ball to Brett Morris who positioned himself to perfection to race in a narrow channel close to the touchline to score his 160th NRL try.

Flanagan landed the sideline conversion and the Roosters led 18-12.

The Storm threatened on the Roosters try line again, and again they were repelled with desire and desperation.

It was Brett Morris who provided the impetus for what loomed as the game sealer with a 40-metre weaving run in the 68th minute before Keary hit the go-button and found Josh Morris – who else – and once again the veteran centre proved too powerful and cunning for Vunivalu.

The Storm hit back straight away with the dancing right foot step of Hughes bamboozling the Roosters defence after a typical Brandon Smith charge.

A Ryley Jacks bomb was dropped minutes later by Tupou. An alert Hughes popped the crumbs over for Momirovski to score wide out.

Smith converted courtesy of a favourable deflection off the right goal post to give Melbourne the edge.

Flanagan then levelled with two minutes left and Keary and Papenhuyzen shelled a couple of one-pointers before the game's only 400-game player stepped up to ice a famous win. 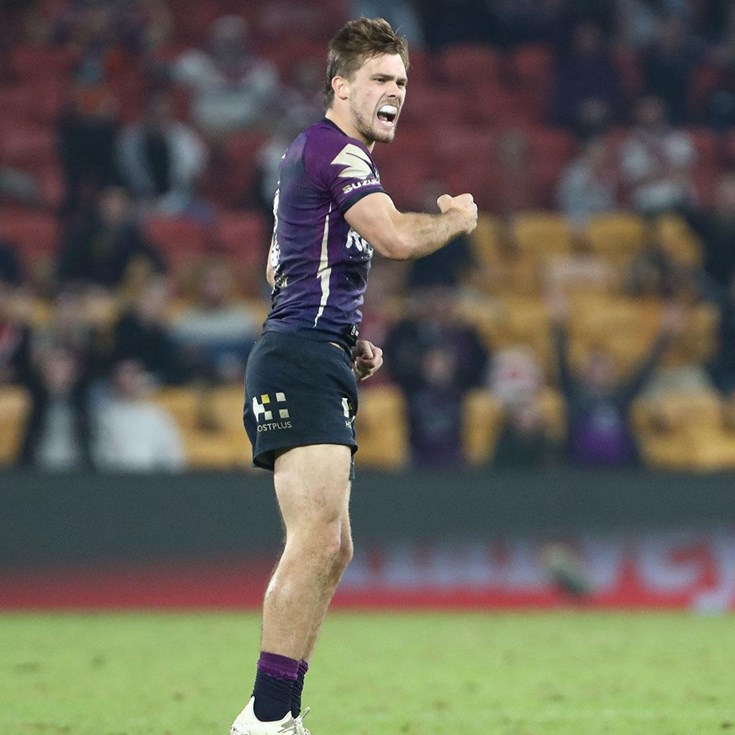 Addo-Carr scores from a Roosters error

Bellamy thinks Storm may see out season in Queensland

Storm not taking Smith for Granted