Melbourne had a surprise loss to the impressive Panthers last week but the Warriors are in a big hole, making the shock decision to sack coach Stephen Kearney despite winning two of four games since the NRL's resumption.

The move is a huge blow to a players already dealing with significant adversity and coming off an injury-hit loss to Souths in which almost nothing went right.

It's still smooth sailing at the 4-2 Storm, with both their losses coming against teams who had to play exceptionally well to beat them, though they may face further disruption if their home game has to be moved due to the recent COVID-19 outbreak in Victoria.

Storm: Brenko Lee is out, with Paul Momirovski (No.21) to take his place in the centres. Lee and Nicho Hynes were the two players dropped from the squad 24 hours out from game time. Melbourne are boosted by the return of Josh Addo-Carr and Jahrome Hughes to the starting side, with Marion Seve and Ryley Jacks making way. Jacks and Max King were the last two players omitted an hour before kick-off. The Storm have won their past eight games against the Warriors.

Warriors: Several late changes to Todd Payten's side with Adam Blair moving from lock to prop and Jamayne Taunoa-Brown going to the bench. Isaiah Papali'i will start the game in the second row and Tohu Harris moves to lock. In the backline, Patrick Herbert moves to the wing and Gerard Beale to centre. Adam Pompey and Leivaha Pulu dropped out an hour before kick-off.

David Fusitu'a and Lachlan Burr are both out of the Warriors team, with Beale and Poasa Faamausili their replacements. Both Fusitu'a and Burr were in concussion protocol in the lead up to the match.

Payten indicated Chanel Harris-Tavita would rotate with Karl Lawton at hooker, while Ken Maumalo is set to play after overcoming a hamstring strain. The Warriors have not won at Kogarah since 2003.

Cameron Munster v Kodi Nikorima. Munster has developed into an elite five-eighth and has been arguably the Storm's best player in 2020, adding another two try assists against Penrith.

Nikorima has forced his way back into the Warriors starting line-up and has been at the centre of everything the Warriors have done well in their two wins over the past month with his running game coming to the fore. 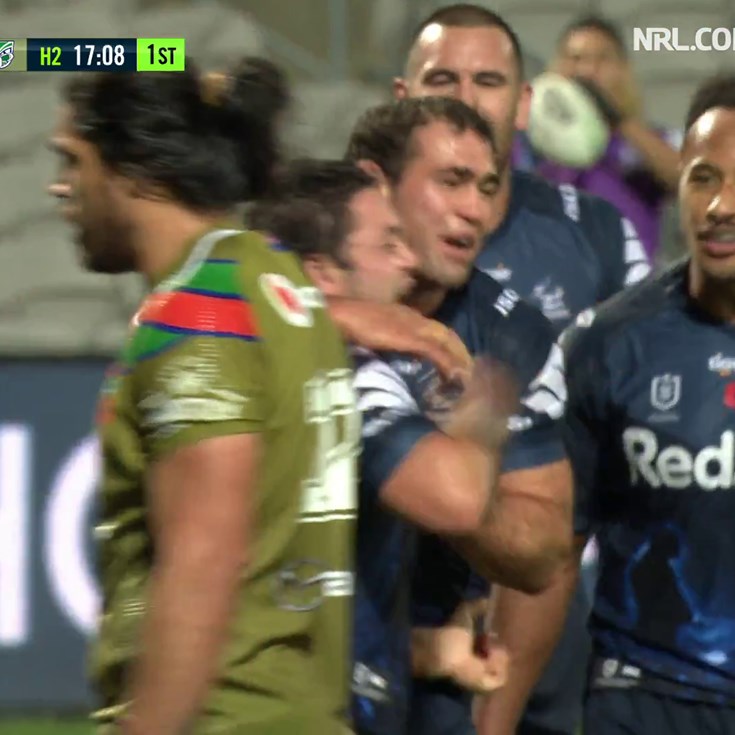 Brandon Smith steamrolls over the Warriors

Hughes provides Vunivalu with his hat-trick