Three Jahrome Hughes kicks in as many minutes put the boot into a desperate Manly defence to keep the Storm's phenomenal 18-game round one winning streak alive.

Melbourne only looked comfortable late at Lottoland, but a pair of Suliasi Vunivalu tries sealed the NRL's surest thing for another season, with a hardfought 18-4 victory ensuring they collect two points once more in week one.

Not since 2001 have the Storm lost in the opening week (they did start 2004 with a bye), and Manly made sure they earned this one.

Desperate goal-line defence kept the Sea Eagles on song for over an hour.

A ferocious Jorge Taufua hit on Marion Seve – not quite measuring on the same on the Richter scale as last year's bellringer on Cameron Munster - even briefly turned that defence into brutal attack.

But after trailing 4-2 eventually the Storm found a way, fittingly via Hughes's right boot and a perfect bounce for Vunivalu to touch down after an hour.

Just three minutes later the headgeared No.7 roosted a bomb high once more, with Tom Trbojevic and Reuben Garrick unable to contain it.

When Hughes found the ball again following a pair of off-the-ground kicks from Josh Addo-Carr, he found Vunivalu again down the left, a pinpoint chip sitting it up again for the Fijian flyer.

In a first half of fumbles and physical defence, Vunivalu once more provided the talking point.

He may find himself under scrutiny from the Match Review Committee after setting off the locals, and Manly veteran Joel Thompson, by leading a leap into the defence knee first as he returned a kick in the 21st minute.

Sean Keppie looks to have a case to answer after he was put on report for a dangerous lifting tackle 10 minutes later.

Despite enjoying 60 per cent of possession – and occupying Manly's end with it – during the first 20 minutes, Melbourne had just a Cameron Smith penalty goal to show for it.

Manly, meanwhile, had 10,315 maroon and white faithful on hand despite coronavirus concerns, even if buckets of soapy water were kept on the sideline for whenever a ball was kicked into the crowd.

A pair of penalty goals from Garrick had Sea Eagles fans optimistic at the end of a try-less first half, equal parts testament to the absorbing defence from both sides and a few first round fumbles.

But with Tui Kamikamica (194 metres) and Jesse Bromwich (184 metres) laying a superb platform, and Smith and Hughes making the most of it, Melbourne won out.

Along with a couple of clutch sideline conversions, Smith was instrumental as usual, his 74th minute grubber sealing it and laying on young prop Tom Eisenhuth's first NRL try in one fell swoop.

Vunivalu has a quick-fire double 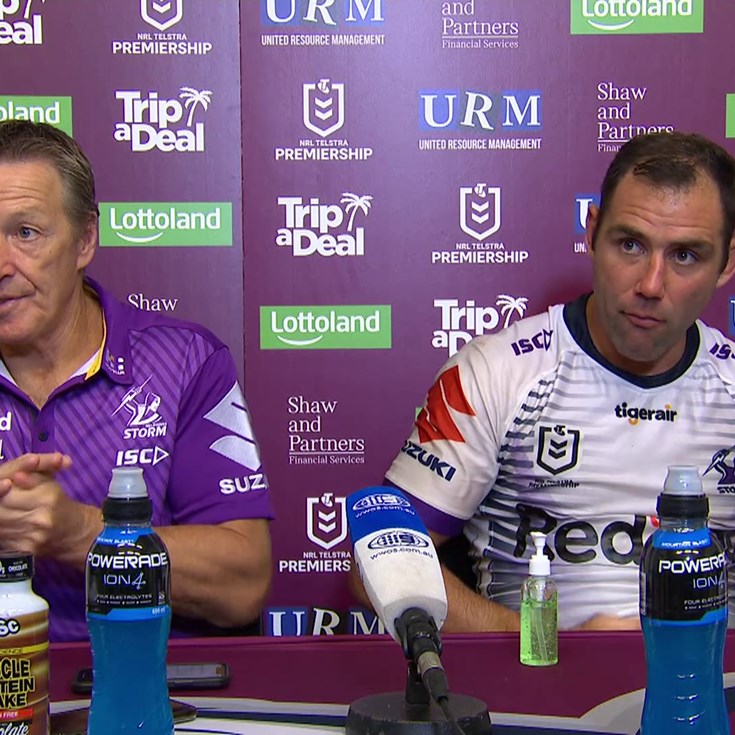