After a slight stumble to finish the regular season against their arch-rivals, the Roosters sent an ominous warning to potential challengers to the throne with a 30-6 demolition of the Rabbitohs in week one of the finals series.

The premiers are perfectly placed to defend their crown and have provided enough evidence in 2019 to prove they aren't about to buckle under the weight of expectation now that they are two wins away from back-to-back titles.

Their best players are all in form and confidence is high after their thrashing of the Rabbitohs.

Melbourne were upstaged by the Raiders in week one of the finals before bouncing back with a solid win over Parramatta to stay in the premiership hunt.

It's going to take something truly special to beat the Roosters and advance to another grand final.

Roosters: The Roosters are 1-17 after Drew Hutchison and Ryan Hall were the final omissions from the match-day squad. Jake Friend's bid to make his long-awaited return from the arm injury which has sidelined him since round 18 fell short. In-form replacement Sam Verrills retained his place at hooker with co-captain Friend cut from the Roosters squad 24 hours out from kick-off along with Sitili Tupouniua. The loss of Jared Waerea-Hargreaves to suspension sees Siosiua Taukeiaho promoted to the starting side and Lindsay Collins come on to the bench. The Roosters have won their past nine games at the Sydney Cricket Ground.

Storm: A late change on the bench an hour before kick-off with Sandor Earl coming in at the expense of Joe Stimson. A big blow for the Storm on Friday with winger Suliasi Vunivalu ruled out with a hamstring injury. Will Chambers returns to the starting side on the wing after he was initially named on the bench for the second week in a row. Curtis Scott retains his spot in the centres. The other player omitted an hour before kick-off was Tino Fa'asuamaleaui.

Luke Keary v Cameron Munster. All eyes will be on the clash between the opposing five-eighths, especially after Mal Meninga openly stated Keary was snapping at Munster's heels in the battle for the Kangaroos No.6 jersey. Munster was rated by some as the best player in the world earlier in 2019, but Keary might've gone past the Melbourne match-winner.

For the Roosters to win

They have the most talent in the NRL and they know it, but Sydney's glamour team aren't afraid to grab their hard hats and get their hands dirty. Trent Robinson is a shrewd tactician and has the best halves combination in the business to carry out his game plan. As long as they adequately cover for the loss of battle-tested prop Jared Waerea-Hargreaves (suspended) and get a decent share of possession, the Roosters should have too much firepower for Melbourne to contain.

Matching the Roosters' workrate in the middle will be vital, while the likes of Felise Kaufusi, Kenny Bromwich, Will Chambers and Justin Olam have to be defensively wary of Angus Crichton, Mitch Aubusson and Boyd Cordner on the edges. Munster and Cameron Smith need to pick their spots and share the play-making and kicking workload, while Roosters five-eighth Luke Keary has to be closely marked for 80 minutes.

We are all a bit blessed in a way – we get the match a lot of people thought was going to be the grand final a week early. With no Jared Waerea-Hagreaves it puts the Roosters pack under a bit more pressure – especially when Melbourne's strength is probably their middle three forwards. The key for the Roosters is their middle forwards having an impact. Siosiua Taukeiaho is going to have to have one of the better games of his career. Roosters by 4

Cameron Smith has kicked a league-high 103 goals in 2019, while Luke Keary is equal first in line-break assists (19) with Souths hooker Damien Cook. Melbourne scored the most points (631) of any team this season and conceded the least (300), while the Roosters (627 scored, 363 conceded) were second in both categories.

The 2018 grand final re-match many NRL followers predicted won't be happening, but at least we get to see these two heavyweights lock horns in the post-season again. After losing 21-6 in last year's premiership decider, the Storm would love to gain some vengeance by knocking the Roosters out of the title race. The Chooks' grand final try-scorers were Daniel Tupou, Latrell Mitchell and Joseph Manu, while Josh Addo-Carr crossed for Melbourne's only try in the 62nd minute after the Roosters led 18-0 at half-time.

Experience the 2019 Finals Series and 2019 Women’s Premiership live. Make sure you get your tickets now 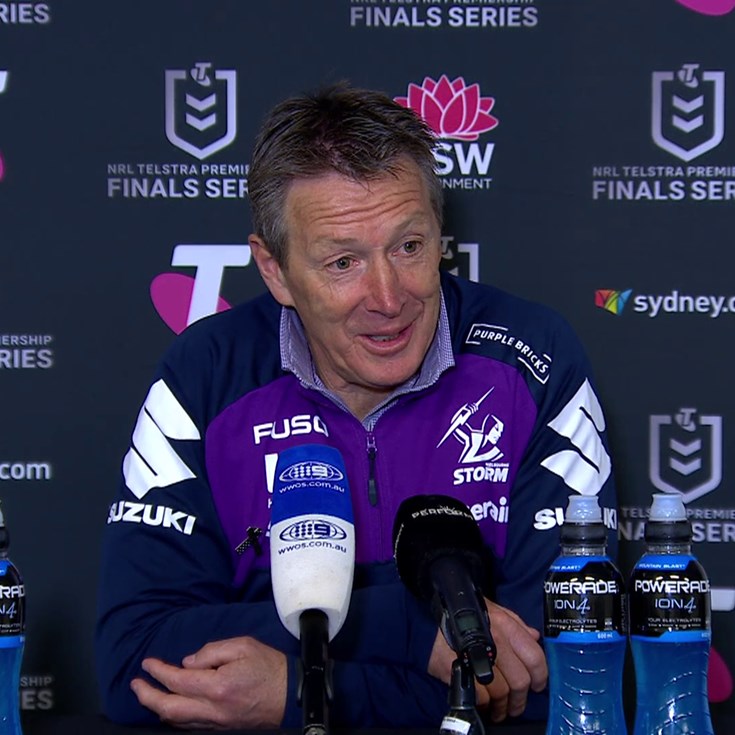 Roosters defeat Storm to lock in grand final with Raiders