Player ratings for the Melbourne Storm team for the NRL semi-final against Parramatta.

1. Ryan Papenhuyzen: Threatened the Eels defence in a dynamic start to the game and produced a spectacular leap into the corner for his ninth try of the season on the hour mark. Rock solid under the ball all night in an impressive display. 8.5/10

2. Suliasi Vunivalu: Sensational first half with an early try and a clever tap down for Jahrome Hughes to score. Given way too much latitude by Maika Sivo and made Parra pay. 7

18. Curtis Scott: A shock late inclusion in the side after playing only one of Melbourne's past 16 games but did all that was asked of him. 6

4. Justin Olam: Limited opportunities in attack down his side of the field in the first half but finished strongly. Had five tackle breaks and 139 running metres. 7.5

The Foxx lights up AAMI Park

5. Josh Addo-Carr: 'The Foxx' quickly erased the memories of last week's late spill by scorching down the left hand wing to finish off an 80-metre Storm try in just the sixth minute. Displayed his dazzling speed again to grab a second try when he chased a Cameron Munster grubber and beat Clint Gutherson to the ball to score. 8.5

6. Cameron Munster: A typically controlled performance from one of the best big-game players in the NRL. A constant threat with ball in hand and kicked well in general play. 8

7. Jahrome Hughes: Has made the halfback spot his own in recent weeks and has booked himself a preliminary final shot against the Roosters with another mature display. Kicked well in general play and distributed the ball nicely. 7

8. Jesse Bromwich: Gave the Storm all the early momentum with 100 running metres in a rampaging 25-minute opening stint and finished the night with 128 metres and 44 post-contact metres. 7.5

9. Cameron Smith: The skipper had put his team well and truly in the box seat before he was sensationally sin binned in the 30th minute for a slap to the face of Reed Mahoney. Set up a try for Munster with a grubber close to the line. Had an off night with the boot only landing one from six. 7

10. Nelson Asofa-Solomona: Joined forces with Bromwich to dominate the early exchanges against the Eels forwards. Big Nelson made 95 metres in his opening stint before returning in the second half to torment the tiring Eels defenders. Finished with 164 metres from 17 hit-ups including 58 post-contact metres. Capped his night with a barnstorming try in the closing minutes. 9

11. Felise Kaufusi: The Maroons back-rower is a real class act with ball in hand and defensively on the Storm's right edge. Delivered a nice pass for Vunivalu to score early. Made the Eels runners feel every one of his 29 tackles. 8

12. Kenny Bromwich: Rock solid and reliable every time he takes the field. Had four tackle breaks and 105 running metres as well as getting through 24 tackles. 7.5

13: Dale Finucane: In a similar mould to Kenny Bromwich, this workhorse does all that is required of him by Craig Bellamy and then some. Plenty of big game experience and he'll be a key man against the Roosters. 7

3. Will Chambers: Hard to imagine he was impressed about being relegated to the bench and only got on the field with 14 minutes to play so had little chance to push for a recall in the prelim final. 3

14: Brandon Smith: Got through 28 tackles and slipped into dummy half when Smith was binned. The Storm barely missed a beat when Captain Cam was off which is a tribute to Brandon's game management. 7

15: Tui Kamikamica: Adds plenty of impetus off the bench with his powerful charges when he comes on to relieve Bromwich and Asofa-Solomona. 6

The views in this article do not necessarily express the opinions of the NRL, ARLC, NRL clubs or state associations. 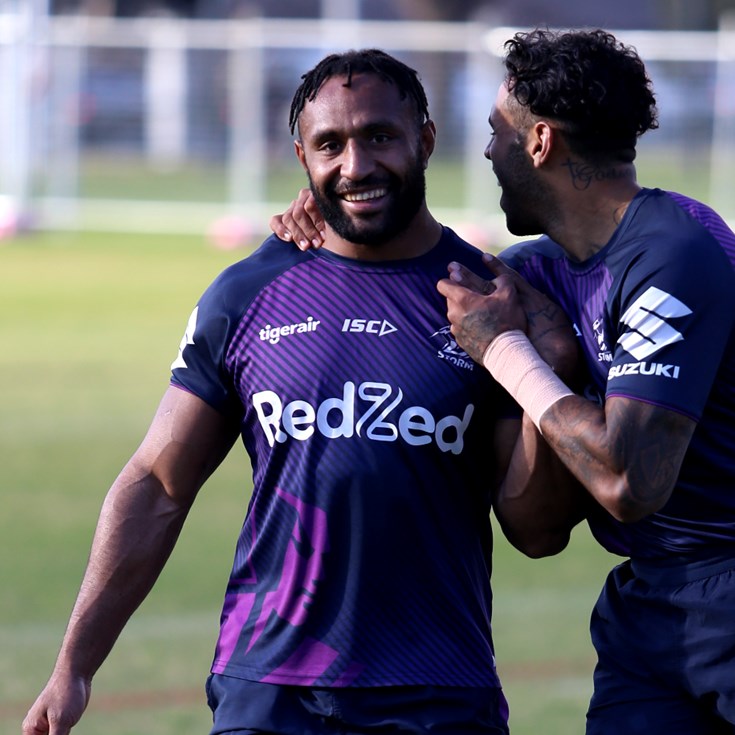