You can bet Melbourne will be desperate to upstage arch-rivals Manly after losing a golden point thriller back in round 19.

The Sea Eagles sent an ominous reminder that they're genuine contenders by beating Canberra 18-14 last Sunday to reclaim fourth spot.

Melbourne, meanwhile, are all but assured of winning the minor premiership after reaching a virtually unassailable 38 competition points with a scrappy 24-8 victory over last-placed Gold Coast.

We've seen many fiery clashes between these sides at Lottoland previously - not least the infamous Battle of Brookvale in 2011 - so expect the heat to be turned up again.

Sea Eagles: Brad Parker replaces Brendan Elliot in the centres, while Lloyd Perrett dropped off the extended bench on game day. The loss of back-rower Joel Thompson to a broken arm has been tempered by the return of Curtis Sironen from a hamstring injury. That means Jack Gosiewski keeps his place in the starting line-up. Brad Parker (knee) was omitted from the extended squad on Friday along with Tevita Funa.

Storm: Melbourne are 1-17, with Curtis Scott and Harry Grant dropping off the reserves list. Will Chambers returns after missing last week's win over the Titans. Curtis Scott goes back to the reserves, while Brodie Croft was also named in the reserves. Tino Faasuamaleaui has been promoted to the bench in place of Tui Kamikamica. Brodie Croft and Sandor Earl were the first two men omitted 24 hours before kick-off.

Addin Fonua-Blake and Marty Taupau have formed a destructive prop partnership for Manly but Melbourne's Jesse Bromwich and Nelson Asofa-Solomona are arguably the best combination in the NRL. A ferocious tussle up front should ensue.

For the Sea Eagles to win

Moving Melbourne around the park and challenging their defensive structures through second-phase play is the blueprint. Manly popped 22 offloads compared to the Storm's eight last time out and it worked a treat.

Maintain the energy and enthusiasm. A first-place finish is near certain and but Melbourne can't afford to look towards the finals yet with Manly ready to swoop and land a psychological blow. Master motivator Craig Bellamy and captain Cameron Smith must get the troops ready for a dogfight.

Manly were down to 15 players last week and Tom Trbojevic didn’t really have much of an impact on the match but they still won. Their forwards were great. Taupau, Fonua-Blake, Jake Trbojevic and the two hookers (Koroisau and Fainu) were great – I thought they were the best five players on the field in Canberra. I wouldn’t expect Cameron Munster and Cameron Smith to have below par performances from a technical viewpoint two weeks in a row. Expect a masterclass from one of them, but I don’t know if Melbourne are a bit off confidence at the moment. Sea Eagles by 1

Manly winger Reuben Garrick has quietly snuck up the top try-scorer's list, his four-pointer last week elevating him to equal-second with 16 tries in his debut season.

Melbourne have won their past three matches at Lottoland and will be out for revenge after losing to the Sea Eagles in golden point in round 19. 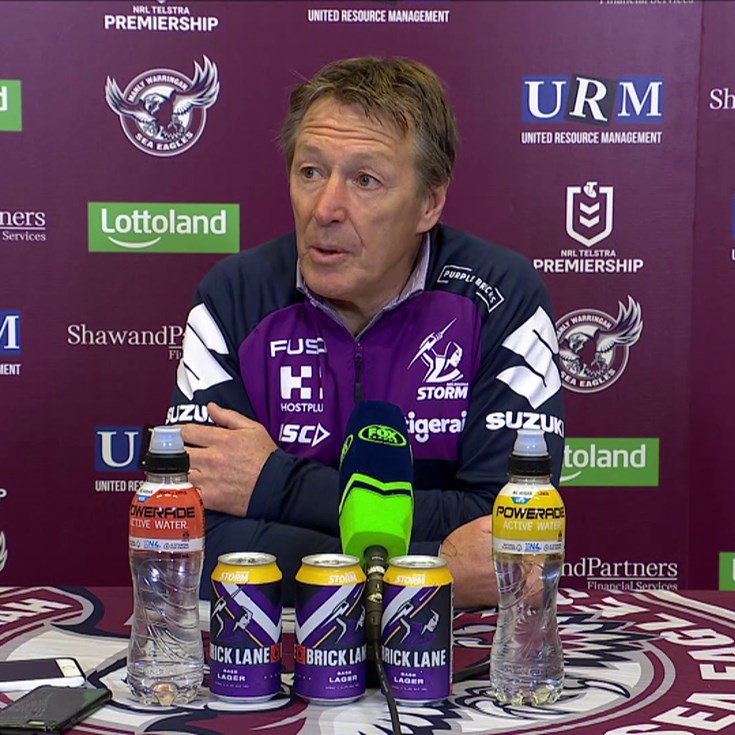 Freakish skill from Addo-Carr helps Olam to a double