With scores locked at 12-12, Munster evaded four defenders with his left-foot step and to score after lock Dale Finucane sent a sublime pass right out onto his chest.

Then with South Sydney edging back to within four points at 20-16, Munster caught the ball on the burst and kicked it forward in one movement, with his halves partner Brodie Croft leaping high in support to ground the bouncing ball.

The score-line could have been far more inflated to the Storm as Felise Kaufusi, Nelson Asofa-Salomona and Suliasi Vunivalu all had tries over-ruled by the NRL Bunker, once replays showed various indiscretions.

A hat-trick to Rabbitohs winger Campbell Graham was not enough to dent the Storm's charge.

Melbourne are now three games clear at the top of the NRL ladder on 36 points, which is 10 points ahead of Manly in fifth place, as Craig Bellamy's men grow further in stature with the finals just a month away and another minor premiership all but shored up.

But Bellamy's men looked far from wounded early as they piled on 12 points in as many minutes, through tries to Jesse Bromwich and Justin Olam off the back of four line-breaks.

Souths finally got across the try line in the 25th minute after a glut of possession. A penalty goal to Adam Reynolds then made it 12-6 and South Sydney were back within striking distance.

The tension in the match rose a little when Storm winger Suliasi Vunivalu leapt too early for a Cameron Munster kick and interfered with a couple of Souths players in the contest. Felise Kaufusi cleaned up the scraps but was denied by the Bunker thanks to Vunivalu's involvement.

The home side were able to exploit Felise Kaufusi's sin-binning for knocking into Cody Walker as he chased a kick to the in-goal early in the second half. The Rabbitohs scored off the next set with Graham crossing for his second. The Reynolds conversion from the left sideline levelled the scores at 12-all.

Nelson Asofa-Solomona was denied by some desperate Souths defence and the Bunker in the 59th minute but there was no stopping Munster two minutes later as his huge left foot step put Melbourne up 18-12.

A long-range break from the Storm forced a scrambling defensive line into an offside play and earned a free shot at two points. Another superb Walker pass handed Graham his hat-trick and set up the grandstand finish before Munster's kick for Croft to score sealed the win.

Each side picked up another injury concern from the match; Reynolds was unable to finish the match with a left leg injury while for the Storm, Olam left the field with a bloody nose in the 21st minute for an HIA and didn't return. 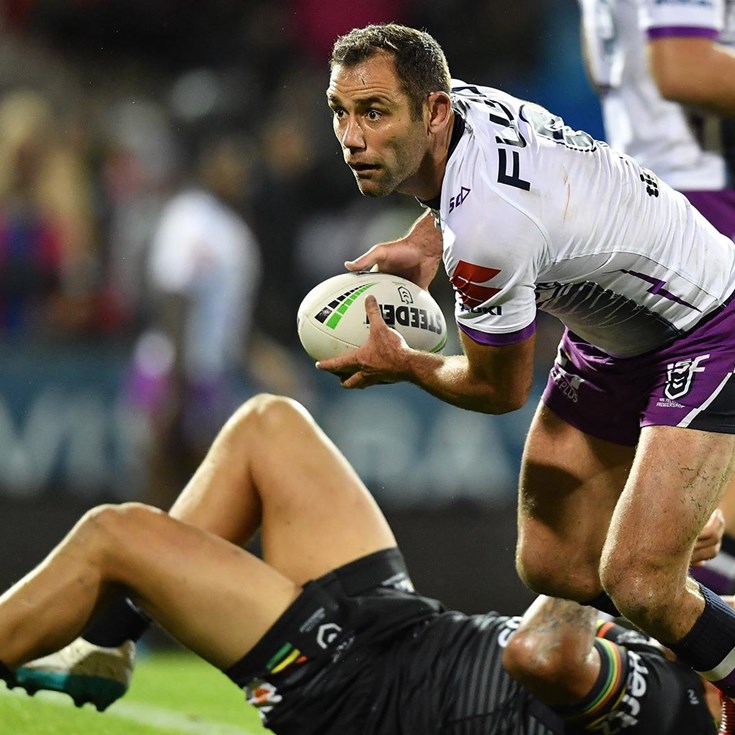 Top try scorer in 2020: NRL.com experts have their say

A huge second half secures another round 1 win for Storm