Most footy followers have an opinion on who the GOAT is, but it's the longevity factor that separates the mercurial Smith from the rest.

He still hasn't shown any real signs of age and remains peerless when it comes to game management and exploiting an opponent's weakness.

The Sharks will show Smith due respect pre-game and post-game, but he knows they'll be out to rain on his parade.

Storm: The cavalry returns in the shape of Origin stars Will Chambers, Josh Addo-Carr, Cameron Munster, Felise Kaufusi, Christian Welch and Dale Finucane so Sandor Earl, Billy Walters, Albert Vete and Tui Kamikamica make way and Joe Stimson and Brandon Smith move to the bench. Justin Olam was also named among the reserves on Tuesday but in a late change on Friday he came into the centres for Marion Seve. The last two men omitted an hour before kick-off were Tui Kamikamica and Sandor Earl.

Sharks: Matt Moylan's hamstring injury has ruled him out and his place at fullback is taken by Aaron Gray. In the back row, Luke Capewell comes in for Wade Graham, who injured his hamstring in Origin III. Andrew Fifita returns from suspension. Aaron Woods has been promoted to the starting side an hour before kick-off and Jack Williams drops to the bench. Paul Gallen is out injured, replaced at lock by Matt Prior. Veteran Josh Morris switches to the wing and Josh Dugan shifts to centre. Kyle Flanagan was omitted from the extended squad on Friday.

A standout for the Storm this year, Brodie Croft will try to continue his big performances against the Sharks, meanwhile Chad Townsend will look to step up and guide the Sharks to an unlikely win against the competition leaders.

The Cam Smith 400th milestone looms as a potential distraction, but it's more likely that his teammates will be doing everything they can to ensure it's a triumphant occasion. Craig Bellamy will check on his Origin stars before settling on a 17-man team but the Storm are rolling and it's up to the Sharks to find a way to stop them.

For the Sharks to win

Worrying signs for John Morris with one win from their past four games, which includes costly back to back losses to Canterbury and Brisbane. Wade Graham's return from Origin will help but the problem lies in the spine, specifically with Matt Moylan and Shaun Johnson. If Moylan is out this week, Johnson and Chad Townsend need to click, while the Sharks also have to solve their goal-kicking woes.

The Storm don’t lose too many milestone games. There doesn’t seem to be many records that Cameron Smith doesn’t have. The Storm have been flexing their muscles of late and are leading by a fair way. Cronulla have been extremely poor for three losses in a row now, this will be a game they will lift for. They love playing Melbourne and this would be the upset of the round if they’re able to do it. But I’ll sway just towards Melbourne here. Storm by 1

He has missed two games but Sharks prop Andrew Fifita still leads the NRL in offloads (40), while teammate Josh Dugan has committed more errors (29) than any player in the competition. The Storm are the top team for tackle breaks (525), run metres (24,561) and kick return metres (3,262).

These two teams have developed a spicy rivalry ever since the Sharks beat Melbourne 14-12 in the 2016 grand final. After splitting their two meetings in 2017, the Sharks prevailed in both clashes last season before the Storm had the final say of the year with a 22-6 victory in the preliminary final. Cronulla drew first blood this season with a 20-18 home win over the Storm in round eight. Interestingly, a field goal has been kicked in three of their past six meetings. 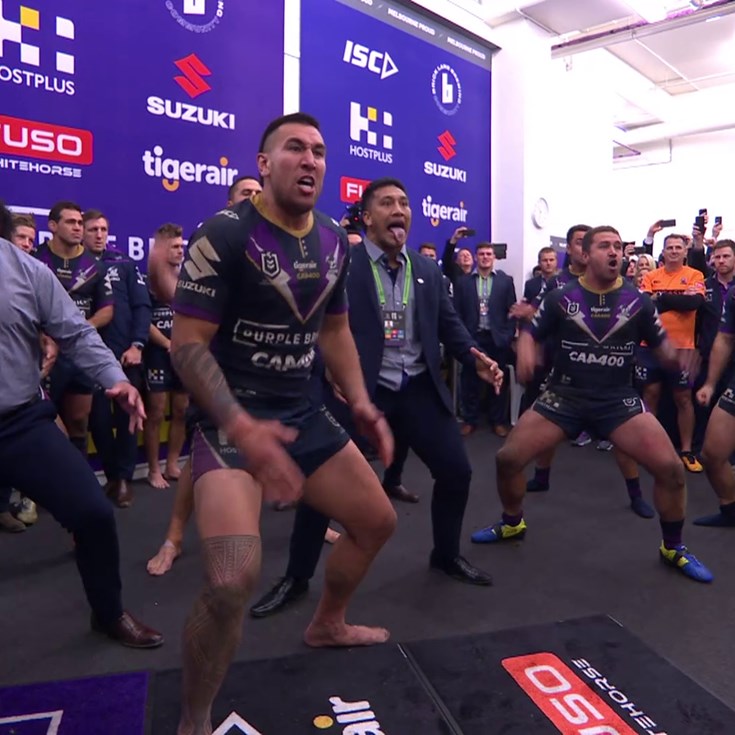 Croft does it all himself off the scrum

Smith given guard of honour on run out