Melbourne first summited a mountain of defence, and now find themselves a giddy six points clear at the top of the NRL ladder after trumping the Roosters 14-12 in Adelaide.

The Storm's sixth win on the trot through the representative period was by no means their prettiest, but without doubt their most telling as they weathered a heavy first-half assault from the premiers, and then a late salvo spurred by Latrell Mitchell.

The Adelaide Oval outing was Mitchell's first since being dumped from NSW Origin duty and came with Blues coach Brad Fittler a keen observer on the sidelines before a 16,297-strong crowd.

Slotting into five-eighth amid a severely rejigged Roosters starting 13, Mitchell showed signs of his best with limited chances – having a hand in one try, a starring role in what should have been another and a textbook trysaver to boot.

But while all eyes remained on the precocious 22-year-old throughout, Melbourne quietly maintained the rage that has made them the best club in Australian sport.

They now sit three wins clear of the Roosters and Rabbitohs on 20 competition points, the furthest a team has resided ahead of their rivals at this point in a season since the Storm last pulled it off in 2012.

Through the first 20 minutes the Roosters threw all bar the kitchen sink at the Storm's goal line, only to emerge with a lone penalty goal from 58% of possession.

Having bent their backs, Melbourne then flexed offensive muscle.

Kenny Bromwich swung wide on the last for Josh Addo-Carr to streak down the left sideline, duly finding Ryan Papenhuyzen for a 6-2 lead.

While the Storm's opening salvo came against the grain, the Roosters converted their possession into points soon enough though, Melbourne's one-time favourite son Cooper Cronk delivering a deft blow in the 27th minute.

With a no-look pop at the line Cronk gave Brett Morris and Daniel Tupou just enough space to tip toe in for a try in the corner, Mitchell knocking them back in front by two from the sideline.

When the Tricolours pressed again, only a Cameron Smith ankle tap stopped James Tedesco charging over.

The very next play Joey Manu did just that, Mitchell feeding both plays as he wrapped around from his regular left-edge to target Melbourne's inexperienced centre Justin Olam.

Manu muscles his way over

Scores were locked up again in the shadows of half-time though, Tedesco fumbling a Brodie Croft grubber back into his path for the young No.7 to dot down.

Roosters fumbles after the break and Croft's probing kicking game had the premiers under the pump.

A try-saving tackle from Mitchell denied Suliasi Vunivalu at one end – the flyers trading facials and sledges afterwards – while a forward pass by Nat Butcher called back Tedesco at the other.

Not until Victor Radley was caught in the ruck, Smith duly nudging Melbourne ahead 14-12 from the resulting penalty, did the scorers stir.

They were at the ready throughout a tense final 10 minutes.

And the Roosters by all rights should have had put them to work, first when Mitchell muscled through down the left and fed Morris, only for the returning veteran to be swamped by Storm defenders.

When a Cronk bomb was allowed to bounce by Vunivalu, Roosters skipper Boyd Cordner loomed for a match-winner, but couldn't handle the Steeden with the line begging.

The Roosters find themselves in the rare position of having just one win from their last four starts as a result, Melbourne in far more familiar surroundings, well out in front. 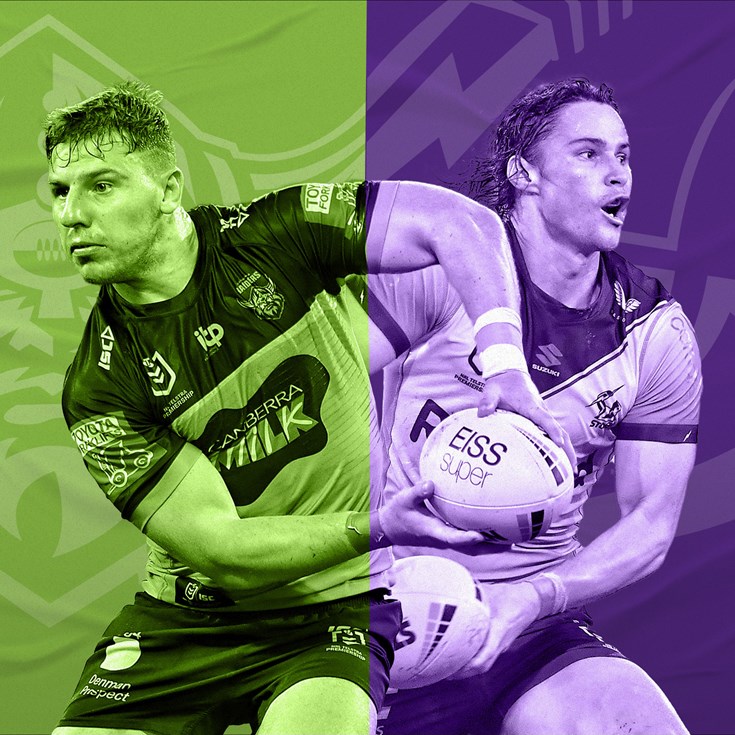