Challenged by coach Craig Bellamy after the 20-18 round eight road loss to Cronulla, Melbourne responded as Melbourne does, snapping out of their recent malaise by thumping the Eels.

Their record stands at 7-2 after nine rounds but Bellamy won't be satisfied until he believes his team truly deserves to be mentioned in the same breath as the Roosters and Rabbitohs as the standout title contenders.

The Tigers conjured the most devastating opening period seen by any team this season against the Panthers, setting up a 30-4 triumph with five of their six tries scored in the first 17 minutes.

Bellamy will be reminding his players this week about their 2018 record against the Tigers - a 10-8 loss in round two followed by a 11-10 loss in round five.

Storm: Joe Stimson replaced Sandor Earl on the bench in a late change, with Billy Walters also dropping out. Injuries to Jahrome Hughes and Curtis Scott opened the door for Ryan Papenhuyzen to start at fullback and Marion Seve to return to first grade. Patrick Kaufusi and Tino Faasuamaleaui dropped out of the extended squad 24 hours before kick-off.

Wests Tigers: The Tigers are 1-17. Josh Aloiai returns after missing the Magic Round win over Penrith with concussion. Oliver Clark is the man to drop off the bench to make way for Aloiai. Clark and Luke Garner were trimmed from the reserves on Wednesday, with Paul Momirovski and Elijah Taylor dropping out on game day.

They managed to keep each other relatively quiet in their two games last year but expect rival No.6s Benji Marshall and Cameron Munster to break out of their shells this time around. Marshall is feeling revitalised after five weeks out with a hamstring strain, using his nous and connection with Robbie Farah to silence the Panthers in his first game back in Magic Round. Munster scored two tries, made two line breaks and a try assist to overwhelm the Eels.

If they keep giving their fullback and wingers room to move, they will continue to burn teams up the middle or out wide. Five of the 11 Storm tries last weekend came from the back three. Even with Jahrome Hughes (concussion) absent, Ryan Papenhuyzen showed as swift a pair of heels, in scoring his 55th minute try, as Josh Add-Carr and Suliasi Vunivalu did in scoring theirs.

For the Tigers to win

Completing their sets as successfully (80%) as they did against the Panthers will go a long way to ensuring their sixth win of the season. They also made seven line breaks to three, and 41 tackle busts to 166, so more of that powerful and elusive running will be required. More importantly, in trying to contain Storm, is that Michael Maguire's side only missed 16 from 316 tackles made.

Craig Bellamy got the response he wanted from his team – after the Sharks loss he questioned whether they were the right players going forward and they certainly responded by thrashing the Eels. They had big performances from Smith, Munster and Curtis Scott who starred in his return but will obviously be missing now for a number of weeks. Meanwhile for the Tigers we saw a bit of magic from Benji and Robbie as they made light work of Penrith. I think the battle in this game is between the two sixes and the two nines, they're all so important to victory for their club. Whoever gets on top in that battle will win on Thursday night. Storm by 6.

Wests Tigers No.7 Luke Brooks leads the NRL in engaging the line, while Storm No.7 Brodie Croft is third in support play - making the showdown between these two as interesting as the five-eighths match-up between Marshall the maestro, and Munster the mover and shaker.

Michael Maguire and Craig Bellamy both played together and then did their early coaching tuition at the Raiders before Bellamy invited 'Madge' to be his assistant at Storm in 2004. They have a similar work ethic around discipline and doing their job. Madge was a key part of Storm's run of four consecutive grand finals (2006-09). 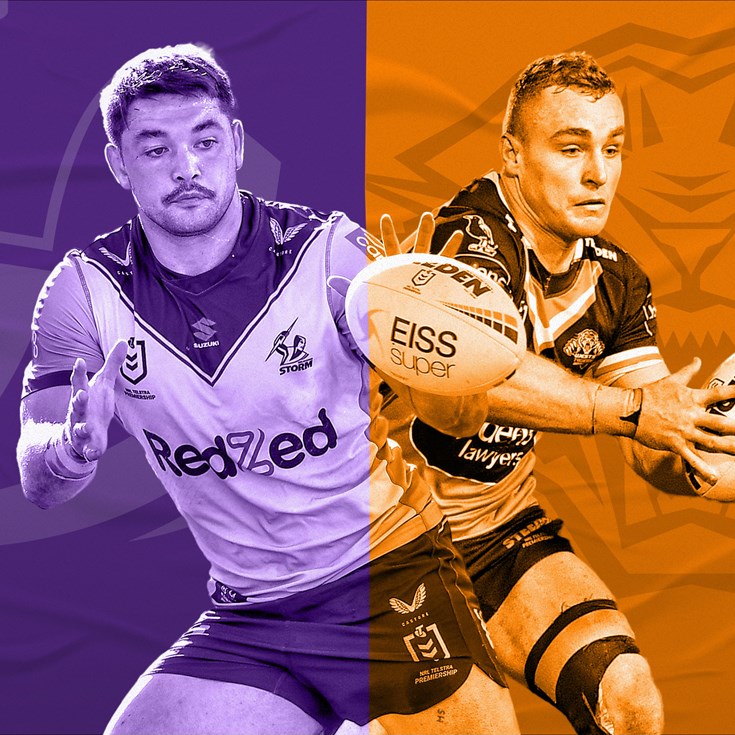