It's not often that the Storm are a frustrated team but they're certainly going through some unfamiliar struggles.

On the other side, Parramatta are in good form and probably couldn't have picked a better time to play the perennial title contenders, especially given that they don't have to meet them on Melbourne's home turf.

The Eels produced some magical moments in their 32-18 comeback win over the Dragons last week and Brad Arthur hopes they kept a few tricks up their sleeve for the NRL's inaugural Magic Round.

Storm: Curtis Scott returns to the starting side in place of Marion Seve while Nelson Asofa-Solomona starts at prop with Christian Welch moving to the bench. Patrick Kaufusi dropped off the reserves list on game day. Brandon Smith (calf) returns on the bench. Billy Walters and Joe Stimson were the two players omitted on the eve of the match.

Eels: Peni Terepo joins the starting team with Reed Mahoney shifting to the bench. Kane Evans and Will Smith dropped out of the squad an hour before kick-off, while Tim Mannah returns. Ray Stone and George Jennings were the two players left out 24 hours before game time.

There's the old champion Smith against the young buck Mahoney, while Munster v Moses should be a ripper, but the clash of the wingers could prove decisive. Storm duo Suliasi Vunivalu and Josh Addo-Carr are two of the best in the game but they face a tough test against two of the in-form wingers in the NRL in Eels pair Blake Ferguson and Maika Sivo.

Whether it's a few choice words from Bellamy or some inspiration from Smith, the Storm need to get some spark and enjoyment back in their game. Lately it looks as though they're just going through the motions and waiting for the opposition to roll over. They need to go out and make it happen because they clearly aren't playing as well as they did in the first month of the season.

For the Eels to win

Impressive as they were in their fightback against the Dragons, Parra can't afford another slow start on Saturday. Melbourne don't often relinquish leads and they're due for an 80-minute performance after their recent patchy displays. The Parra forwards have to get over their Storm counterparts, while Mitch Moses has to direct his team with patience and the back three of Ferguson, Sivo and Clint Gutherson need to continue their red-hot form.

The Storm will have an unhappy preparation - their coach will be extremely intense this week. They will want energy, they will want aggression. They’ll be up against a Parramatta side that play a very similar style. For the Eels, Gutherson and Moses have been the stars. Gutherson’s ability to be able to pick when to run from dummy half has been so special, he just changes the game. Eels by 2

Gutherson leads the NRL in line break assists (9), while Sivo is equal fourth in line breaks (7) and Brad Takairangi is fifth in off-loads (18). Gutherson is also first in runs (151) and run metres (1,520). Storm fullback Jahrome Hughes is the clear leader in kick return metres (640).

Barring a finals clash, Saturday's game is the only time Melbourne and Parramatta will square off in 2019. It was the same situation last year when they met just once, with the Storm prevailing 20-4 in Melbourne in round 23. The Storm are just looking to get back into form at the moment, while the Eels will be fired up to make a statement. 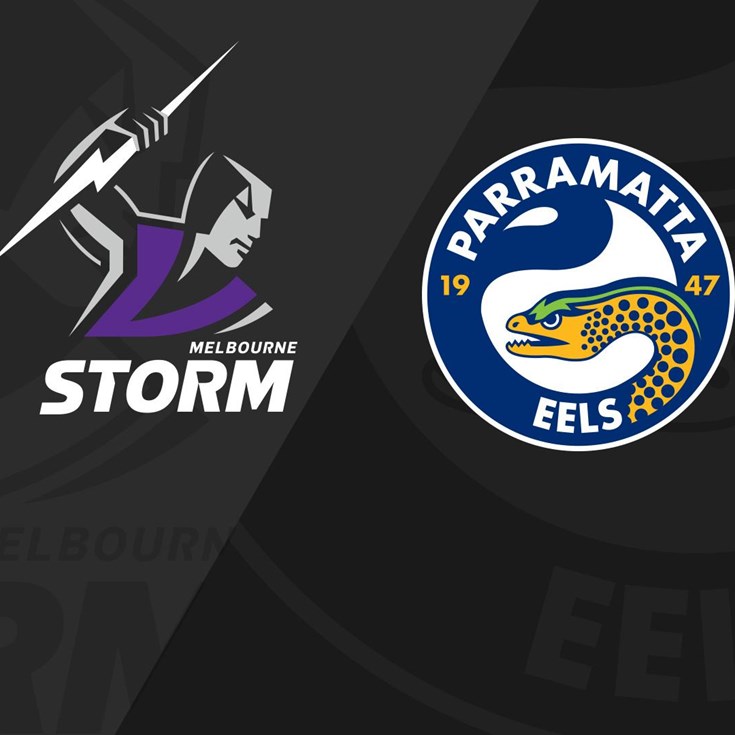 Storm bring the magic to Magic Round