The Melbourne Storm have manufactured an Anzac Day escape courtesy of a Brodie Croft field goal to defeat the Warriors 13-12  at AAMI Park on Thursday night.

The Storm were outplayed by an undermanned Warriors outfit for much of the night and had to wait until a Brodie Croft field goal with three minutes remaining to clinch victory in front of 21,539 fans in Melbourne.

Craig Bellamy's side trailed 8-0 after 10 minutes and were behind for most of the second half before a late Cameron Munster penalty goal and Croft's one-pointer sealed their sixth win of the season.

The match could have easily gone the other way, with the Warriors taking it to their more fancied opponents and controlling long portions of the contest.

Hooker Issac Luke turned back the clock with a vintage performance, Chanel Harris-Tavita yet again looked good, while Peta Hiku deputised for injured skipper Roger Tuivasa-Sheck at the back with a strong showing.

Even more impressive was the performance of debutant Patrick Herbert, who did some nice things at both ends of the field and certainly didn't look out of place against the star-studded Storm backline.

The stirring pre-game Anzac commemorations seemed to fire up the Warriors, with former Storm duo Tohu Harris and Adam Blair combining for the opening try as the visitors skipped out to an early 8-0 advantage.

The Warriors' inexperienced spine - without injured duo Blake Green and Tuivasa-Sheck - were finding plenty of space and they could have easily crossed again had Blake Ayshford held on to the ball with the line in sight.

It was the hosts who scored next as Munster was able to regather his own kick courtesy of a Josh Addo-Carr tap back as the Storm closed within four at the break.

Whatever Bellamy said to his troops at half-time worked as Melbourne claimed their first lead of the night just three minutes into the second half when Jahrome Hughes latched onto a clever Cameron Smith grubber to score.

The Warriors hit back shortly after as Hiku found some room to put Ken Maumalo into a gap out wide, leaving the visitors up by two with 30 minutes remaining.

Herbert tackled Will Chambers into touch to halt a Storm foray, before Hiku diffused another attack as time ticked down.

Munster slotted a penalty goal right in front of the sticks with five minutes remaining to level the scores, before Croft calmly potted a late field goal to break the collective hearts of the Warriors and seal the gritty triumph. 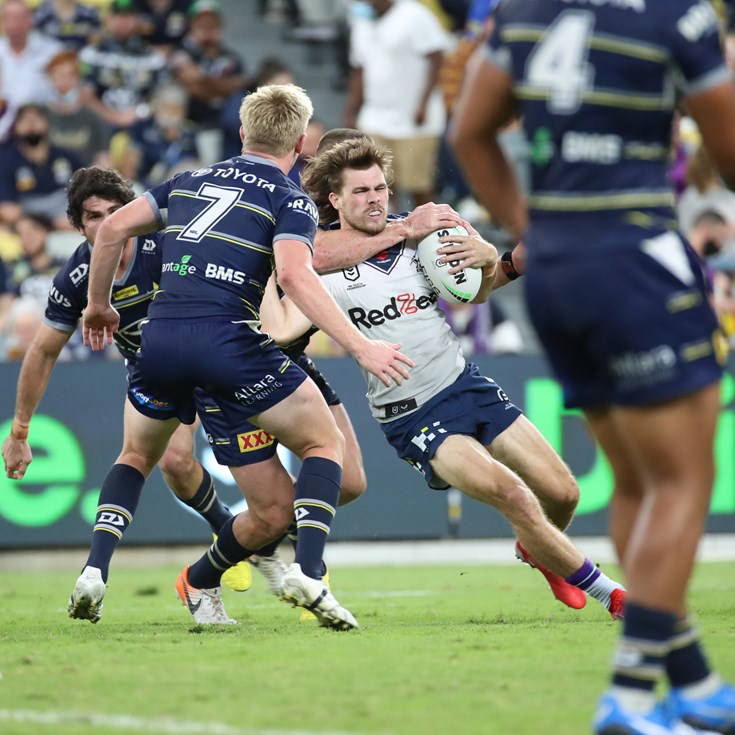 Munster shows his class to set up Croft