Melbourne coach Craig Bellamy has given a huge wrap to winger Suliasi Vunivalu after he welcomed a new child into his family on the same day he helped the Storm score a 7-6 win over the North Queensland Cowboys some 2600km away.

Vunivalu played one of his best games of 2018 according to his coach, a performance all the more impressive considering the massive day he had been through.

"I don't know if too many people know, but Suliasi Vunivalu's partner had a little boy last night at 20-past-two and he jumped on the plane this morning to come up here," Bellamy said.

"We didn't expect that at all, originally we thought she was going to have it on the Wednesday so he was going to come up Thursday night, but when we heard that she wasn't having it until [Thursday] night we just said 'don't come up'."

"He was very, very persistent that he wanted to come up and play and I thought he probably had his best game of the year to be quite honest, he was outstanding."

It wasn't all fairy tales for Melbourne, with back-rower Felise Kaufusi put on report for dangerous contact with Matt Scott's legs.

The incident has put his potential State of Origin debut in doubt, but Bellamy believes it would be harsh to suspend him.

"You see them all the time ... it certainly wasn't an aggressive yank, it was just a mild pull on the leg," he said.

"I don't know if they were having a little bit of a joke because Kaufusi comes from up here, but it was really silly what he did."

"I don't think there was any malice in it at all ... you'd be devastated if you missed an Origin for that."

Kaufusi on report for cannonball tackle 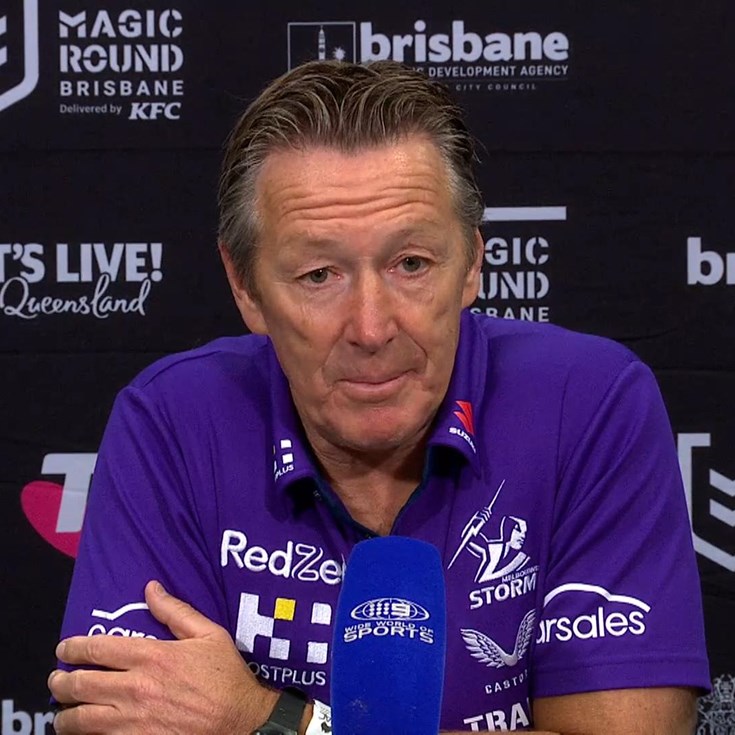