They do not make them any tougher than David Kidwell.

The Kiwi enforcer built his 12-year professional career on that very trait.

Four of those years were spent down in Melbourne as he played a pivotal role in shaping Craig Bellamy’s team during those early years between 2003-2006.

Storm 2018 Memberships are on sale NOW! Sign up today!

He may be retired now but he remains heavily involved in the game as the Head Coach of the New Zealand national team.

The 40-year-old has his hands full at the moment preparing his side for the upcoming Rugby League World Cup.

Kidwell spends a lot of his time flying across the ditch, preferring to meet his Australian-based players face to face and will next week oversee New Zealand’s initial training camp before the full squad comes together on October 17.

Kidwell immediately moved into coaching after retiring in 2009.

His got his start with the Rabbitohs Under-20s team and enjoyed immediate success, guiding them to a Minor Premiership and Grand Final berth.

Then the call came from a familiar number and all of a sudden he was back in purple.

“Craig Bellamy gave me a ring in 2011 to come down to Storm so I jumped at the chance,” Kidwell said.

“I knew their values of hard work so I wanted to learn a bit more from the coaching side of things.

“I had an amazing experience down there, winning the premiership in 2012 and then going overseas for the World Club Challenge the next year.

“The Club culture there is obviously strong and they put a lot of work into making sure it stays strong. Your work ethic always pays off and I learned to put a lot of your time and energy into your coaching, that is probably the biggest lesson I got out of there.”

Ultimately the need to be closer to family forced Kidwell to return home.

He joined the Kiwis as an assistant coach in 2014 and two years later assumed the main role, taking the reigns from former Storm teammate Stephen Kearney.

Melbourne helped Kidwell realise the importance of building a solid culture in a football side.

That can be a rather difficult thing to do in a national team, where a coach is often in a different place or in this case a different country to most of his players.

“That is probably the biggest challenge, not having that day-to-day access that is required to build a culture for a sustained period of time,” Kidwell said.

“We have to make do, it is what it is, you have to look at what time you have got and make sure you are putting that time, energy and commitment into implementing the values that I want to be seen in the Kiwi’s jersey.”

Those values are not too dissimilar to the ones that have held Storm in good stead for so many years.

Kidwell played for five Clubs during his career including the Rabbitohs, Roosters, Eels and even getting a start with the Adelaide Rams during the Super League days in 1997.

He may have worn many jerseys but the purple one is what he holds onto most fondly.

“Definitely, that is the most time I spent at the one Club,” Kidwell said.

“I love the Storm, love the culture, Craig has done a wonderful thing there and Frank Ponissi joining in the later years.

“Obviously everyone talks about their culture and what they do around there, it is one of the best in the world.”

When asked to recall his Storm days, those grueling pre-seasons as the first thoughts that come to mind.  Kidwell was part of the very first group to take part in the now infamous Bellamy boot camps.

He understands that punishment was all for a purpose though.

“You look back and you think that they were tough but the message behind them really helped us,” Kidwell said.

“If you can get through Storm pre-seasons, anything the NRL throws at you, you will be able to handle. That is one of the mantras they still use to this day.”

The rugby league world cup kicks off at AAMI Park between Australia and England on October 27. 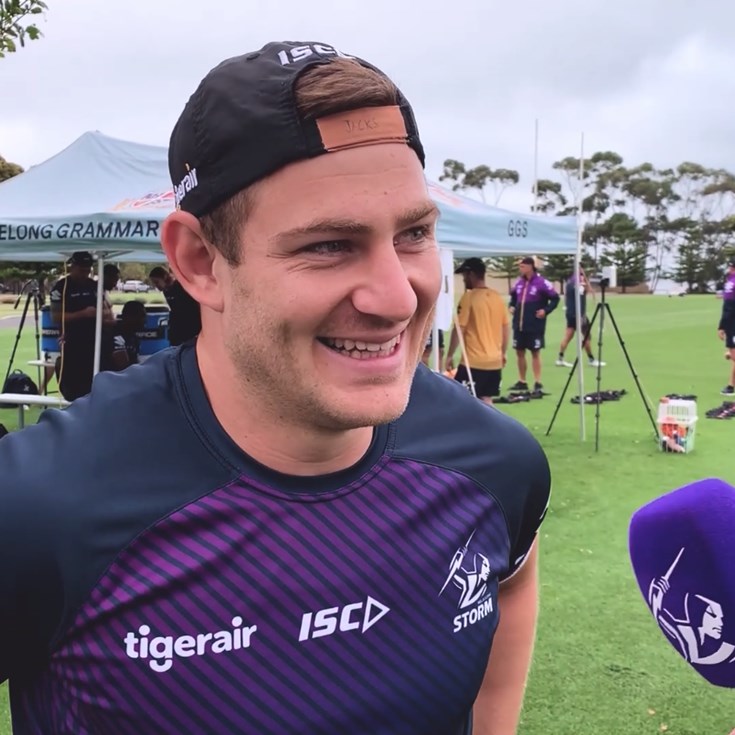