Melbourne Storm have suffered their second defeat of the 2014 season, falling to the Titans in a heartbreaking loss at AAMI Park.

In front of 11,930 a late penalty to the Titans converted by Greg Bird handed the visitors a 28-26 victory, moving John Cartwright’s side into the top four on the competition table.

Earlier, Craig Bellamy made two changes to his selected side, bringing in Justin O’Neill for his first game of 2014 and Dayne Weston who made his Storm debut.

On a sunny afternoon in Melbourne, Storm opened the scoring, taking an early lead thanks to some creativity from halfback Cooper Cronk. Cronk’s chip kick over the Titans defence found Sisa Waqa on the right wing who reached the try-line despite pressure from David Mead at fullback.

Secure your seat at AAMI Park for Storm's Round 6 match-up with the Dragons, Monday 14 April, 7pm.

After going close to doubling their lead on the opposite wing through Young Tonumaipea, Melbourne were forced to defend their lead with the Titans catapulting into attack.

A line break from Nate Myles lead the to visitors’ first points of the afternoon when Kevin Gordon crossed the line on the left wing. The Titans then took the lead, enjoying further success on the left through Brad Tighe.

A carbon copy of Melbourne’s opening try is what it took for the hosts to re-take the lead. Another precise Cronk kick found Waqa for his second try of the afternoon.

With both sides trading sets as the half progressed a rare kick from winger Anthony Don allowed fullback Mead to cause yet another lead change, allowing the Titans to take a two point lead into half-time.

An instant reply followed for Melbourne, cancelling out Kelly’s effort and continuing the see-sawing nature of the contest.  Some quick work from Cameron Smith out of dummy half played through Cronk who recorded his third try assist of the afternoon allowing Kenny Bromwich to score.

Eight minutes later, Mark Minichello responded for the Titans, reinstating his side’s eight point advantage scoring the third try of the second half.

Refusing to fall away, Melbourne kept themselves in the contest, capitalising on a penalty to claw back to within two points when Will Chambers finished some swift ball movement on the right edge.

A penalty, which Cameron Smith duly converted allowed Melbourne to tie the game up with 10 minutes remaining. 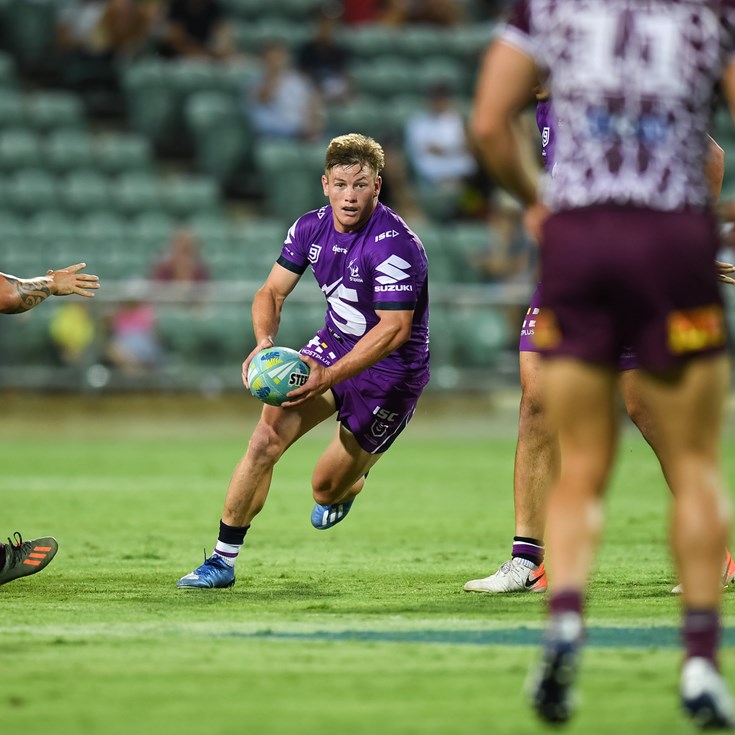